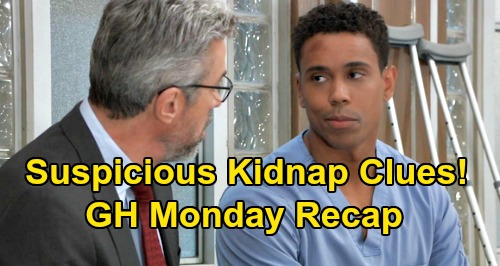 General Hospital (GH) spoilers recap for Monday, April 27, reveal that Brando Corbin (Johnny Wactor) was surprised to learn that Sam McCall (Kelly Monaco) and Kristina Corinthos-Davis (Lexi Ainsworth) were Molly Lansing-Davis’ (Haley Pullos) sisters. As Molly and Brando talked outside of Charlie’s Pub, Molly asked if Brando had told her sisters that they slept together. Brando said no, and that he didn’t blab about his private life.

Brando asked how Molly’s boyfriend was, and Molly said he was better and that he had been abducted. Brando asked if the police knew who abducted him or why, and Molly said no, but that at least TJ Ashford (Tajh Bellow) was back now. Molly apologized to Brando for misrepresenting herself, and just then Sam came outside. Brando covered by telling Molly that her car was ready for pickup.

Molly went back inside the pub with Sam, and they sat down at a table with Kristina. The subject of TJ’s kidnapping came up, and Sam didn’t say much since she knows more about it that she wants to let on. Molly told her sisters about she and TJ agreeing to become domestic partners, and Sam wondered if Molly said yes because she felt pressured after TJ’s kidnapping.

Molly said that she thought she said yes for all the right reasons, then she revealed that when she thought TJ had dumped her, she slept with someone else. Sam asked who he was, but Molly didn’t spill that it was Brando – rather, Molly said that it was a guy who happened to be the first face she saw. Kristina said, “Good for you!” but Sam chastised Kristina.

Sam wondered if Molly felt pressured into being a domestic partner with TJ because she had slept with someone else. Molly lamented about what she had done, and about how she thought that TJ had broken up with her through his mom. Molly told her sisters about how she drove her car up over a curb and that she went to a garage, where she encountered Brando.

Meanwhile, at GH, Mac Scorpio (John J. York) questioned TJ about his abduction. TJ reported that he recalled being in a damp basement, and that one of his abductors had a specific ringtone, used a southern accent, and had taps on his shoes. TJ remembered some other details, like hearing construction nearby, which Mac took in. TJ then left GH with an idea for a sweet surprise for Molly.

Over at Jordan Ashford’s (Briana Nicole Henry) office, she talked with Curtis Ashford (Donnell Turner) about Cyrus Renault (Jeff Kober). Curtis suggested that Jordan let Cyrus believe that he’s won and then find his vulnerabilities. Soon, Mac came in, all hopeful about TJ’s recollections. Mac showed Jordan and Curtis where he thought TJ had been held.

Turns out, the location where TJ might have been held had a bodega next door, so Jordan suggested that Mac speak with the owner. Mac left, and Jordan lamented that Mac’s investigation could turn up Cyrus. Curtis wondered what Cyrus would do in that case.

Sonny wanted to deal with the Cyrus situation instead, and he instructed Jason to set up another meeting with the drug trafficker. Jason left, and Carly hugged Sonny, consoling him about Mike.

Later, Brando swung by the Corinthos house to pick up some paperwork from Sonny. Sonny was gone to his meeting with Cyrus, but Carly was there and gave Brando the paperwork. After some small talk about the remodeling, Carly and Brando talked about the garage, and Brando noted that he worked recently on Molly’s car.

Over at the Metro Court, Alexis Davis (Nancy Lee Grahn) argued with Neil Byrne (Joe Flanigan) about whose fault it was that they were in their current predicament, with Neil having lost his license.

Alexis noted that Neil seemed angry, and she wondered whether he was too angry to see her now. Just then, Alexis’ phone pinged, and she had received a email from the New York bar association – they want to see her immediately.

At another table, Lulu Spencer (Emme Rylan), Laura Collins (Genie Francis), and Cyrus continued their tense conversation. Laura suggested that Cyrus use his money to donate to good causes – like freeing Port Charles of illegal drugs or children’s after-school programs.

Cyrus thanked Laura, then made a comment about their paths crossing again soon. Laura and Lulu were unnerved. Soon, Cyrus got a text saying, “the meeting is back on,” and he took off, leaving Lulu and Laura alone.

Lulu said that Cyrus’ words sounded like a threat. Lulu then got a call from Diane Miller (Carolyn Hennesy) saying that Valentin Cassadine (James Patrick Stuart) wasn’t going to contest her petition for full custody of Charlotte Cassadine (Scarlett Fernandez).

At Brando’s garage, TJ showed up to pick up Molly’s car as a surprise for her. Brando immediately knew who TJ was upon hearing that he was there to pick up his partner’s car. Brando hesitated, then said that he had finished the car that morning.

TJ noticed that Brando didn’t ask him for ID, and Brando covered, checked TJ’s ID, and handed him the invoice. TJ then looked at the invoice and said, “There’s something wrong here.”

At the pier, Jason and Sonny met with Cyrus and his associate. Cyrus said that he was disappointed when Sonny chose to cancel last night, and that it was a sign of disrespect. Sonny said, “I’m here now, let’s get this over with.”

Cyrus guessed that Sonny canceled because of his father, and Sonny disregarded the statement, saying that they were here to talk business and that “I’m here to do the talking.”

Cyrus then said that Sonny was right, and that his dad’s condition is a family matter. Sonny fired back that Cyrus made Mike a part of this. Cyrus cooed that he was a free man now, and that he was in prison when the attacks on Sonny’s family happened. Sonny said that Cyrus may be free, but he’s not untouchable, or innocent, or safe.

Finally, at Lulu’s house, Lulu disconnected from a call with Diane, then told Laura that Diane said there was no reason to go back to family court because Valentin said he wasn’t going to fight the petition.

Lulu said that she still didn’t trust Valentin, and she asked Laura what she thought. Laura said that normally she doesn’t trust him, but in this case, she thinks that Valentin is telling the truth.

That was a great episode of GH! Be sure to stay tuned for more great drama. We’ll give you updates as General Hospital news comes in. Stick with the ABC soap and don’t forget to check CDL often for the latest GH spoilers, news, and daily recaps.