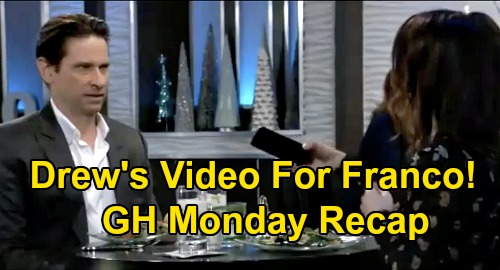 General Hospital (GH) spoilers recap for Monday, January 13, reveal that Brook Lynn Quartermaine (Amanda Setton) was relieved to get word that Nikolas Cassadine (Marcus Coloma) was alive. She talked a bit with Tracy Quartermaine (Jane Elliot) about the matter, when Michael Corinthos (Chad Duell) and Ned Quartermaine (Wally Kurth) came in, talking about ELQ business. Brook Lynn then announced to the group that she changed her last name to Quartermaine.

Michael wondered if this was connected to the gig she booked at The Floating Rib for later, and it turns out that she believed a name change would relieve her of her contractual obligations to her producer.

Michael noted that she was still obligated under her contract, despite changing her name. Brook Lynn then left, and Tracy harassed Michael a bit about ELQ.

After Michael left, Ned accused Tracy of making a play for ELQ again and asked what her angle was. Tracy insisted that she wasn’t after the company now, but that someone else was.

Sam then explained how she and Jason have a deal with Robert Scorpio (Tristan Rogers), but before she could explain the deal, Neil Byrne (Joe Flanigan) arrived at the door.

Sam made a quick exit and Alexis and Neil settled in on the couch. Things were awkward and Alexis could tell that something was obviously wrong with Neil. After some weirdness, Alexis demanded to know what was going on. Neil then explained that he is losing his medical license, and it was because of Alexis.

Next, at Crimson, Peter August (Wes Ramsey) dropped in to see Maxie Jones (Kirsten Storms) and they made a plan to meet at the Metro Court for dinner. Once he left, Damian Spinelli (Bradford Anderson) and Georgie Spinelli (Lily Fisher) arrived for a surprise visit.

Spinelli explained that Ellie Trout (Emily Wilson) has a job interview in a neighboring town, so they could be moving back to the area soon. Later, Sam arrived and was thrilled with Spinelli’s news.

Meanwhile, at the Metro Court, Elizabeth Baldwin (Rebecca Herbst) and Franco Baldwin (Roger Howarth) enjoyed dinner together. Franco was curious about what he was like when “Drew Cain” was in control of his body.

Jason entered and Franco said that he understood they bonded when he was Drew, but Jason insisted that “they” didn’t bond.

Franco then spotted Peter across the room and called him over, noting how Peter saved his life and was so brave. This made Peter anxious and uncomfortable, which Jason readily noticed. Peter took off, while Jason pondered the interaction.

Back at their table, Elizabeth revealed that she had “Drew’s” phone with a video that he left for Franco. Franco felt that he wasn’t ready to watch it yet. Meanwhile, over at the bar, Michael talked with Jason about the upcoming memorial service for Shiloh Archer (Coby Ryan McLaughlin) and wondered who planned it and what was going to happen there.

At Anna Devane’s (Finola Hughes) house, Robert arrived wanting to talk about Peter and the shooting at the hospital. Robert noted that she had the file on the gunman, and he wondered if she had found any connection between him and Peter.

Anna lied and said she hadn’t found anything. He then warned her that once there’s proof against Peter, she won’t be able to save him, and he doesn’t want her to go down with him.

Over at The Floating Rib, Dustin Phillips (Mark Lawson) and Lulu Spencer (Emme Rylan) enjoyed a drink, then decided to head back to his place since the kids were both busy for the night. Dustin went to pay their tab, and when Lulu stood up from her booth, she ran smack dab into Brook Lynn.

The two women snarked at each other for a while. Eventually Lulu joined Dustin at the bar, and Brook Lynn headed to the stage for her performance.

Suddenly her sleazy producer showed up and threatened to sue her if she performed and violated her contract. He then got handsy and Brook Lynn punched him, prompting Lulu and Dustin to come to her rescue.

Dustin was busy throwing the producer up against the wall, when Brook Lynn exclaimed, “Dusty?” Lulu reeled when Dustin appeared to recognize Brook Lynn, and she stood there horrified as she realized that the two knew each other.