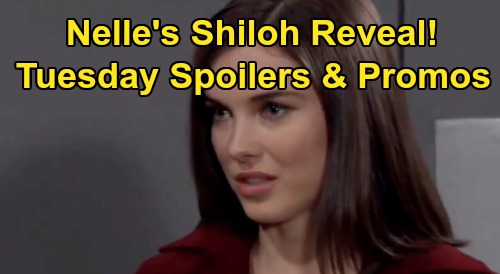 General Hospital (GH) spoilers for Tuesday, January 14, tease that Curtis Ashford (Donnell Turner) will need some guidance. He’ll call someone up and ask if he could trouble him or her for relationship advice, so it won’t be long until Curtis is spilling his problems. This may have something to do with the person Jordan Ashford (Briana Nicole Henry) summoned to help with her Bob Massicotte investigation.

It turns out that person is a man who Jordan apparently had a bit of a romantic history with. Things may or may not have been serious, but this is someone Jordan trusts and cares about. If Curtis gets updates, he may find himself feeling on the outside. Whatever the case, Curtis will get some words of wisdom from another knowledgeable Port Charles resident.

Over with Tracy Quartermaine (Jane Elliot), she’ll lecture Ned Quartermaine (Wally Kurth) about their family and what really matters. Tracy will share a lesson with Ned – one that she feels his daughter would do well to learn.

Of course, Brook Lynn Quartermaine (Amanda Setton) has already learned some valuable lessons about doing business with the wrong people! That slimy manager of hers just showed up to stop Brook Lynn’s gig and refused to leave her alone. Dustin Phillips (Mark Lawson) intervened, which led to a moment of recognition between “Dusty” and Brook Lynn. It seems they were an item once upon a time.

Lulu Spencer (Emme Rylan) isn’t going to be pleased when she hears the details, so this could lead to another fierce fight. Regardless, Brook Lynn will feel the show must go on. She’ll get on stage to perform despite Mr. Sleazeball’s threats, so we’ll see if this performance pans out.

Next, Alexis Davis (Nancy Lee Grahn) will battle guilt over her role in Neil Byrne’s (Joe Flanigan) tough blow. He revealed that his medical license is being taken away because of Alexis, so she’ll think it was a mistake for them to get involved.

However, Neil will have a different view of the situation. Tuesday’s GH preview video shows Neil asking, “What if I want to make this mistake over and over again?” This certainly isn’t the career news Neil wanted, but he’ll apparently think being with Alexis is worth it.

Other General Hospital spoilers say Shiloh Archer’s (Coby Ryan McLaughlin) memorial service will get underway. Just before it begins, Willow Tait (Katelyn MacMullen) will try to solve the mystery of who’s behind it. Harmony Miller (Inga Cadranel) already insisted it wasn’t her, so it looks like Willow will find someone else to grill on Tuesday.

The preview clip shows Willow asking a woman if she arranged Shiloh’s memorial, so that could be Daisy Kwan (Kelsey Wang) or another Dawnie. Whatever the case, it doesn’t really matter considering someone else is to blame for this memorial mess – and her name’s Nelle Benson (Chloe Lanier).

Nelle’s set to make a stunning announcement on Tuesday, so that probably involves her marriage to Shiloh in prison. She’ll likely reveal that she’s the widow of Shiloh and has scored her freedom. Harrison Chase (Josh Swickard) will end up stopping a showdown that gets out of hand, so Nelle may push too many buttons!

At the PCPD, Laura Webber (Genie Francis) will talk to Jordan about Nikolas Cassadine’s (Marcus Coloma) return. Laura will admit that although she’s angry with Nik, she loves him no matter what he may have done. Nikolas still needs to repair the damage he’s caused, but Laura can’t help it if she’s relieved to have her son back.

“If you want to be a Quartermaine, you have to start thinking like one.” #GH pic.twitter.com/F2Oz4i3bbA