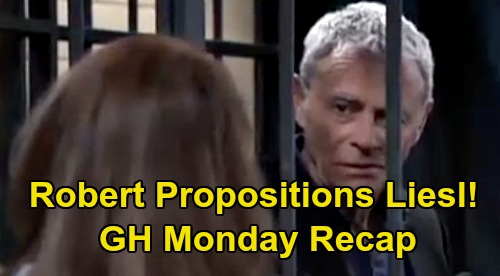 General Hospital (GH) spoilers recap for Monday, March 16, reveal that Nikolas Cassadine (Marcus Coloma) approached Ava Jerome (Maura West) as she was drinking at the Metro Court, angry about the renovations that Ava had arranged at Wyndemere. Nikolas revealed that he wanted the house to stay the same for Spencer Cassadine (Nicolas Bechtel), and Ava said that she knew how haunted he was about hurting Spencer.

Their conversation turned to Hayden Barnes (Rebecca Budig), with Nikolas lamenting about her disappearance. He asked for Ava’s take on the matter, and she said that Hayden must know that the danger in Port Charles is over, which implies that she’s either in real trouble or has met with some kind of accident.

Ava encouraged Nikolas to lie to Elizabeth Baldwin (Rebecca Herbst) about their suspicions, allowing Hamilton Finn (Michael Easton) and Violet Barnes (Jophielle Love) to at least enjoy Violet’s upcoming birthday. Nikolas balked, and Ava fired back that if he didn’t want to lie, then he shouldn’t do bad things to begin with. She left upset.

At another table, Robert Scorpio (Tristan Rogers) spoke with Anna Devane (Finola Hughes). Anna mentioned that she and Finn were back together, and that Peter August (Wes Ramsey) was no longer an issue between them. Robert balked, and Anna listed all the reasons why Peter was in the clear. Robert admitted that it checked all the boxes, and he noted that he hoped Anna was right about all this.

In Julian Jerome’s (William deVry) back room, he woke up next to Britt Westbourne (Kelly Thiebaud). They got dressed, and Julian asked if he could have her number. She declined, but said that she knew where to find him and that maybe she’s see him around…or not.

Britt then went to the PCPD to see Liesl Obrecht (Kathleen Gati) in jail. Liesl was happy to see her daughter, and promptly told her that she had been framed by Peter, who needed a scapegoat when Jason Morgan (Steve Burton) started connecting the dots. She asked for Britt’s help in proving it, and she seemed to get to Britt by pointing out that Maxie Jones (Kirsten Storms) was in grave danger.

But then Liesl remarked that she should have killed Peter in the cabin, and Britt immediately said, “And I’m out.” Britt said that part of her wanted to believe that Liesl was innocent, but that she couldn’t afford to get involved. She then left, with Liesl calling out after her.

Robert arrived at the jail next, and Liesl lamented that he surely thought she was guilty. But Robert surprised her by saying that on this occasion, maybe she wasn’t guilty. He told her that the two of them might be able to help each other.

Over at GH, Franco Baldwin (Roger Howarth) and Elizabeth talked about their financial troubles – their pipes burst last night, and their heat was turned off. Elizabeth wasn’t too worried about the whole thing, but Franco fretted about needing money.

Elizabeth then talked with Finn, who asked if she had heard anything from Hayden. He noted that Nikolas had been dodging him, and they both wondered why Hayden wasn’t returning to Port Charles, given that she was no longer in danger. Later, Anna dropped by to see Finn with a new tea set for Violet. Finn said that Violet missed her mom, and the two declared their love.

Elsewhere in the hospital, Franco talked with Scott Baldwin (Kin Shriner) about his financial situation, telling Scott that he needed $100K. Scott said that he could help him get a loan, as well as a plumber and an electrician for the house. He was impressed with Franco’s new “responsible” persona, and he told Franco that everything would work out.

Franco then went to his art room, where he met Ava. He lamented about needing money, and Ava said that he shouldn’t worry because his art would be lucrative again. Franco worried that perhaps his talent had disappeared, but Ava assured him that his talent was still in there, and that he just needed to believe in himself. He then started work on her portrait.

Back at the Metro Court, Nikolas was leaving when Elizabeth caught him and asked about Hayden. He noted that he was about to tell her a story about how he had a lead, but that he couldn’t lie to her. He told her the truth – that Hayden was gone without a trace and that something might have happened to her. Elizabeth said that it was his fault and walked out.

Over in the Corinthos kitchen, Josslyn Jacks (Eden McCoy) wondered to Carly Corinthos (Laura Wright) about how long it would take for things to get back to normal for them. Carly honestly didn’t know, but she thought that homeschooling was the best bet for them right now, and she wondered which of Josslyn’s current teachers she’d prefer to homeschool her. Josslyn smiled.

Josslyn asked Carly if she ever thought about up and leaving in times of danger, and Carly said every minute, because her job as a mother supersedes her love for Sonny Corinthos (Maurice Benard). She encouraged Josslyn to always check in with her about how she’s feeling. Carly noted that Josslyn was resilient, and the two shared a tender mother/daughter moment.

Next, Sonny, Jason, and Brando Corbin (Johnny Wactor) walked into the new bike garage that Sonny had set up for Brando. “Welcome to your new place of business,” Sonny said. Brando immediately worried that the shop was a front for illegal activity, but Sonny assured him that it was all above board. Sonny left, and Jason talked further with Brando.

Brando wondered it if was better for him to just go back to Chicago, and he openly questioned Jason’s relationship to Sonny. Jason said that Sonny and Carly were his best friends, and that he owed Brando for saving Carly’s life in the recent shooting. Brando explained that he experienced terrible things in the service, and that he had PTSD – he just reacted during the shooting, it was automatic.

Still, Jason said that he was grateful to Brando, and he reiterated that nothing illegal was going to go on in the shop. Suddenly, the men heard a noise, and Jason drew his weapon.

Finally, Julian returned to his room behind Charlie’s Pub to find Sonny there waiting for him. Sonny said that he had some questions since Julian had paid for Brad Cooper’s (Parry Shen) defense. He openly wondered why Julian would help Brad, and he said that maybe Brad had something on Julian. Sonny said that if he finds out that Julian had anything to do with helping Brad steal Wiley Quartermaine Corinthos (Erik and Theo Olson), then he’d have to address it.

There’s definitely a lot going on right now on General Hospital, so stay tuned! Stick with the ABC soap and be sure to rely on CDL for your very latest General Hospital recaps and spoilers. We’ll keep you in the loop as news comes in.