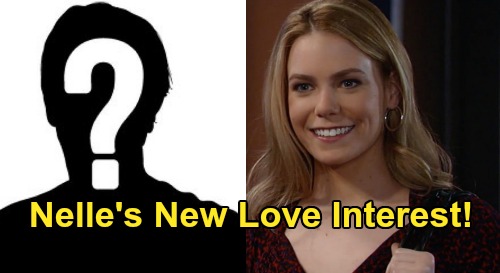 General Hospital (GH) spoilers tease that it looks like Nelle Benson Archer (Chloe Lanier) will be on the GH scene for a while and needs a love interest. Nelle is currently embroiled in some big drama, as she’s suing Michael Corinthos (Chad Duell) for full and sole legal custody of Wiley Quartermaine Corinthos (Erik and Theo Olson). Nelle’s up for quite a fight, and she’ll surely give as good as she gets, since she’s got shark lawyer Martin Grey (Michael E. Knight) on her side.

Well, Nelle is doing just about everything she can to show that she’s learned from her mistakes and that she’s not the same person that she was back when she committed her crimes.

While Nelle’s enemies and detractors will never buy the story that she’s reformed and that she’d be a good mother to Wiley, Nelle’s got a good shot at convincing the family court judge that Wiley should be with her.

Diane Miller (Carolyn Hennesy) has told Michael that he’s got slightly better than a 50% chance of winning the case, which means that Nelle’s got a fighting chance at winning, too.

With all the talk of Michael getting married to Willow Tait (Katelyn MacMullen) to increase his chances of winning, there hasn’t been any talk of Nelle getting married – probably because there’s no one on canvas who would currently be interested in being with her after what she’s done.

But we did find it interesting that Nelle expressed some fleeting interest in Valentin Cassadine (James Patrick Stuart) a while back. Nelle subtly suggested that they might get together and even help each other out, but Valentin quickly nixed that idea as he turned Nelle down flat.

That suggested to us that Nelle was possibly looking to increase her chances of winning the custody case by getting married herself.

And that leads us to wonder about what Nelle’s romantic chances are in Port Charles at this point. If Nelle sticks around Port Charles, it seems that she would need a love interest, and that gets us wondering who it could be.

It looks like Nelle has been totally shot down by Valentin for good, and once it does come out that Nelle is Nina Reeves’ (Cynthia Watros) daughter, any lingering chance that Valentin would even look at Nelle will be squashed.

It’s also the case that everyone in Port Charles who is roughly the same age as Nelle is either taken or absolutely can’t stand her…except for one person…Brando Corbin (Johnny Wactor).

But the prospect of Brando getting involved with the likes of Nelle seems pretty far-fetched at this point. After all, Brando is a no-nonsense guy who doesn’t put up with people who play games, and we have to imagine that he’d be really turned off by Nelle.

Plus, it seems that even if there were an initial spark between Brando and Nelle (say before Brando knows exactly who Nelle is), then Carly Corinthos (Laura Wright) and Sonny Corinthos (Maurice Benard) would swiftly school Brando on Nelle’s history.

While Harrison Chase (Josh Swickard) was madly in love with Nelle in the past, he’s head over heals with Willow now. It’s conceivable that Nelle will target Chase after he fails to convince Willow to marry him at Michael’s wedding, but she’s probably burned all bridges to the cop. It really seems like Nelle is going to need to get involved with someone totally new to canvas if TPTB ever decide to give her a love interest.

We’ll see what happens with Nelle, but its looking like she might stay single for a while unless GH brings on a fresh hunk. Do you expect to ever see Nelle in a real romantic relationship with anyone? Stick with General Hospital and don’t forget to check CDL often for the latest GH spoilers, daily recaps, and updates.