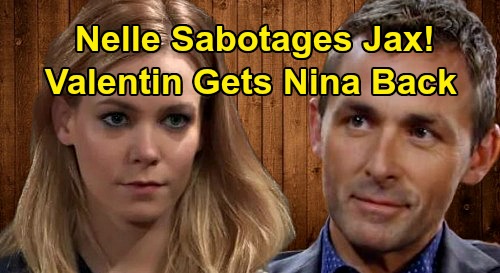 General Hospital (GH) spoilers tease that Valentin Cassadine (James Patrick Stuart) may soon see a golden opportunity. GH viewers know Valentin’s still in love with Nina Reeves (Cynthia Watros) and perhaps always will be. Valentin has insisted that he’ll wait for Nina, but she’s made it clear he’ll be waiting a long time!

Charlotte would obviously rather see Nina reunite with her papa. At Kelly’s, Charlotte made sure Jax tripped on her backpack and probably has other dirty tricks in store. That could lead to more issues for Jax and Nina, who seem like a doomed couple at this point.

Of course, there’s one person who could really seal the deal on ruining Nina’s new relationship. General Hospital spoilers say Nelle Benson Archer (Chloe Lanier) could find herself in the perfect position to shove Jax aside.

GH finally delivered the moment we’d all been waiting for when they showed us the bottom of Nelle’s keepsake box. The half-heart pendant necklace was inside, but Nelle seemingly has no clue where it came from. Frank may have told Nelle some bogus story, but that pendant is clearly the other half of Nina’s missing heart.

This means Nelle is Nina’s biological daughter, which opens up a lot of story prospects and gives Nelle some new prospects, too! As Nina’s child, Nelle can influence her mom’s choices. This could give Valentin another angle to work as he tries to win Nina back.

General Hospital fans will recall that Valentin cooked up a fake bio daughter when he recruited Sasha Gilmore (Sofia Mattsson). Valentin scored a romantic reunion through that plot, but it ultimately fell apart. Nelle could provide a do-over since these two have been in cahoots. Valentin and Nelle have been helping each other out, so perhaps they could do it again.

As Nelle eventually bonds with Nina, she could try to steer Nina in Valentin’s direction once more. It’d be easy to do, particularly since Jax bought Nelle’s kidney from Frank. Nelle can play up how much she suffered and possibly give Nina some negative feelings toward Jax.

Nina suggested she would’ve done the same thing in Jax’s shoes, but she may change her tune when she finds out how much Jax hurt her daughter. In return for Nelle’s matchmaking help, Valentin could ensure that Nelle has all the support she needs.

The Corinthos family is relentless, so Nelle could use a strong ally like Valentin backing her up on a more permanent basis.

Valentin may offer specific ways to target Nelle’s enemies and keep Wiley Quartermaine-Corinthos (Erik and Theo Olson) away from them. Nelle admitted she wanted a “magic makeover” like the one Carly got – the chance to get away with everything and escape the sins of the past. Valentin might convince Nelle that magic makeovers are overrated!

It’s power Nelle should want, and Valentin might be able to give Nelle that. As other GH news emerges, we’ll offer the latest updates. This Nina and Nelle storyline will provide plenty of twists and turns, so don’t miss all the action. CDL’s your hotspot for General Hospital spoilers, updates and news posts.