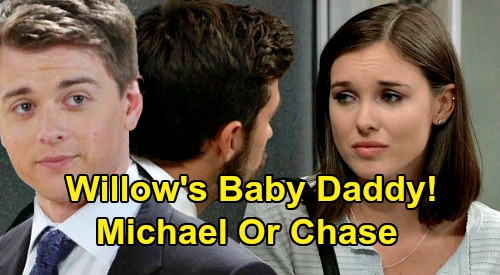 General Hospital (GH) spoilers tease that once the ABC soap returns with new episodes, we’ll finally see our first glimpse of true married life for Willow Corinthos (Katelyn MacMullen) and Michael Corinthos (Chad Duell). GH fans know Michael and Willow got married shortly before the custody hearing, so they haven’t really had a chance to explore what this arrangement is like just yet.

Once all the custody drama winds down for now, Willow and Michael can see what it’s really like to be marred. Of course, the outcome of the custody case will certainly affect the mood at the Quartermaine mansion. If Michael were to win full custody along with Willow, that’d be the exact outcome he wants.

Naturally, that’s exactly why GH probably won’t give Michael fully custody! Nelle wants the same thing, so she may not end up getting full custody either. Joint custody would make things difficult for both Nelle and Michael.

It would annoy these coparents and force them to keep interacting, which seems like the best possible scenario in terms of drama.

Regardless, there are bound to be some nice moments for Michael and Willow no matter what. Married life will probably work out well for them since their personalities mesh so well. It’s hard to imagine any big fights anytime soon.

Willow and Michael are only going to grow closer as friends – and eventually, perhaps they’ll become lovers. It’s easy to imagine Sasha Gilmore’s (Sofia Mattsson) prediction about Willow falling madly in love with Michael. GH has been inching them in that direction ever since they first met.

With that in mind, perhaps we should look to the future and start thinking about Willow’s next child. Is this family with Michael and Wiley Quartermaine-Corinthos (Erik and Theo Olson) something that you want to see General Hospital fully explore?

If so, maybe you’d like to see Willow have a baby of her own with Michael to complete their little happy fam.

Of course, there are still plenty of Willow and Harrison Chase (Josh Swickard) supporters out there. Perhaps you’re holding out hope that Willow will eventually divorce Michael and reunite with Chase. In that case, you might also hope General Hospital will wait and let “Chillow” have a baby together.

There’s even the possibility that Willow will break her marriage vows after she learns the truth about the fake affair. If Willow and Michael are already sleeping together by then, GH writers could even offer up a “Who’s the Daddy?” Paternity mysteries can be fun, so that’d be one way to go.

At some point, it seems like Willow will have another child of her own. Willow can serve as a mother figure for Wiley, but General Hospital needs to make up for the baby they cruelly took away.

When the time comes, do you want Willow to have a baby with Michael or Chase? Should Willow keep building on this “Millow” family or would you rather see her form a new one with Chase by her side?