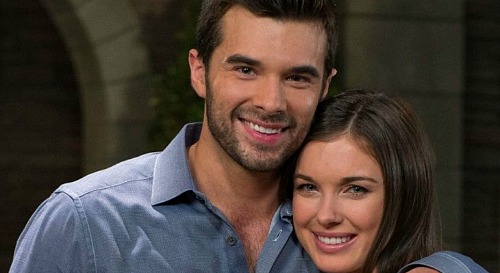 General Hospital (GH) spoilers reveal that Willow Corinthos (Katelyn MacMullen) may be married to Michael Corinthos (Chad Duell) right now, but many fans are holding out hope for a “Chillow” reunion. Willow admitted that despite Harrison Chase’s (Josh Swickard) betrayal, she was still in love with him.

Of course, GH fans know Chase didn’t actually betray Willow. Chase is stuck pining as well, so there’s certainly the potential for Chase and Willow to reunite down the road.

Even if Willow ends up falling for Michael, her love for Chase probably won’t go away. The same goes for Chase, who might try to move on as well.

Willow and Chase’s spark will always be buried underneath the surface – just waiting to reignite. Are you hoping Chase and Willow get back together at the end of this storyline?

It’s sure to be a long road to get there, but that’s the great thing about soaps! It may take some time, but couples tend to come back around sooner or later. It’s all about the journey back to true love.

Chase and Willow seemed like a hurdle to a Willow and Michael pairing in the beginning, but “Chillow” grew surprisingly popular. A lot of that was due to Josh Swickard and Katelyn MacMullen’s adorable, easy chemistry.

However, soaps have to deliver drama – and that meant tearing Chase and Willow apart for a while. Since they both still have so much love in their hearts, will this build to a reunion in time?

Many General Hospital fans would like to see Willow and Chase have a wedding of their own.

Willow’s marriage to Michael is one of convenience for now. It’ll likely become more complicated as feelings develop, but that doesn’t change what could’ve been and what could still be between Willow and Chase.

It’d be nice to see Willow get a real marriage to a man she’s head over heels for. Likewise, marrying Willow would make Chase the happiest man alive.

Will Chase and Willow still get their happily ever after – at least as much as anybody gets that on a soap? These two deserve a real shot, so maybe they’ll get one after Willow and Michael’s divorce. As other GH news pops up, we’ll pass along updates.