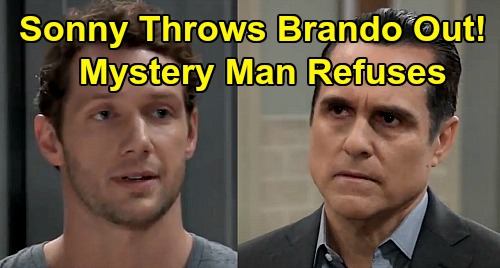 Sonny knew it was best for Brando to stick around and stay in the safety net that only Sonny can provide. That led to Sonny setting Brando up in a new auto garage and encouraging this fresh start in Port Charles. It was the ideal situation since Sonny could keep an eye on Brando and protect him during all this mob mayhem.

However, Sonny will have a sudden change of heart soon. During the week of April 27-May 1, Sam McCall (Kelly Monaco) will have a tense encounter with Brando. General Hospital spoilers say Sam will manage to rub Brando the wrong way – but she won’t be too happy with him either!

There’s a good chance this will be about Molly Lansing-Davis (Haley Pullos) and that hookup they’re hiding. Once Sam gets updates on that, she’s sure to go into protective mode. GH has really been highlighting Sam and Molly’s bond lately, which was likely in preparation for this storyline.

Sam can be fierce here as she takes charge for her sister’s sake. She won’t want to see Molly and TJ Ashford’s (Tajh Bellow) relationship destroyed by one mistake. Furthermore, Sam may feel like Brando took advantage of Molly in a vulnerable moment.

Molly seemed to know exactly what she was doing, but Sam probably won’t see it like that. It’s doubtful that Sonny will either, which could lead to that shocking decision we mentioned. General Hospital spoilers say Sonny will make a bold declaration. He’ll let Brando know that his presence in PC isn’t needed any longer.

Of course, it’s possible that’ll be due to Sonny and Jason Morgan (Steve Burton) eliminating Cyrus Renault’s (Jeff Kober) threat, but that doesn’t seem to be the case. Cyrus just got out of prison, so GH might as well milk this feud for all its worth.

It wouldn’t be much of a story if Sonny just let Jason kill the guy. That’d be that and we would have wasted time with all this mob mayhem.

Sonny and Cyrus’ war could keep going for a while. Even if it doesn’t, Sonny probably wouldn’t tell Brando he’s not needed around there anymore without a good reason. That reason may be Brando’s hookup with Sonny’s niece!

After Sonny hears the news that Brando slept with Molly, he may be just as protective as Sam. Sonny’s at least going to know this is an added complication none of them need. It sounds like Sonny may try to run Brando out of town over all this, but Brando may not be keen on leaving. Between Brando’s new auto garage and his growing interest in Molly, he’ll have a couple of great reasons to stay.

Brando may eventually decide to fight for Molly – or at least stick around and hope her relationship with TJ ends. Molly and TJ indeed seem headed for a split thanks to Molly’s cheating as well as her decision to lie about it. The circumstances were complex, but that may not stop TJ from breaking up with Molly over her actions.