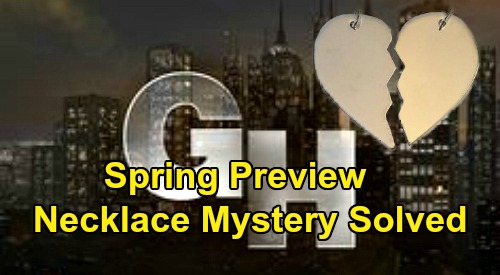 General Hospital (GH) spoilers tease that many Port Charles residents will be in crisis mode. There’ll be some stunning blows and complicated romances, so let’s dive in and see what’s in store. Here’s a hot spring preview, which features more than a few shockers!

First, we should address a relationship that’ll be put to the test. Willow Tait (Katelyn MacMullen) will continue to bond with Michael Corinthos (Chad Duell) as they make Wiley Quartemaine-Corinthos (Erik and Theo Olson) their priority. That’ll naturally take a toll on Willow’s romance with Harrison Chase (Josh Swickard).

Based on the way General Hospital spoilers are heading right now, it looks like Michael and Willow will ultimately plan their wedding. You can bet that bombshell will break Chase’s heart! His love for Willow will remain, but the custody chaos Nelle Benson Archer’s (Chloe Lanier) unleashed may tear them apart.

Speaking of the custody chaos, Carly Corinthos (Laura Wright) will remain determined to take Nelle down. General Hospital spoilers say a special episode’s coming up – and it’ll be all about Carly.

The show will do a deep dive into Carly’s history, so there’ll be some interesting surprises. GH buzz hints that Eden McCoy (Josslyn Jacks) may play a young Carly in some enlightening flashback scenes.

Over with Valentin Cassadine (James Patrick Stuart), his ELQ takeover goal will move forward. Unfortunately, Valentin could face some snags in another crucial area of his life.

Charlotte Cassadine (Scarlett Fernandez) will prove she’s her father’s daughter with some manipulative moves. General Hospital spoilers hint that Valentin will be quite disturbed by Charlotte’s upcoming behavior.

At Violet Barnes’ (Jophielle Love) birthday party, GH fans can expect total mayhem to break out. Will the jig finally be up for Peter August (Wes Ramsey)? Peter’s indeed on the guest list along with Robert Scorpio (Tristan Rogers), who’ll work hard to clear Liesl Obrecht’s (Kathleen Gati) name. This seems like the prime setup for big trouble, so General Hospital should deliver an event to remember.

Next, we should talk about Jason Morgan (Steve Burton) and Sam McCall’s (Kelly Monaco) new hurdle. As the danger surrounding Cyrus Renault (Jeff Kober) gets worse, Jason will push Sam away.

He’ll think distance is for the best since he’ll want to keep Sam safe along with the kids. That’ll spark some tension for Jason and Sam as they navigate this perilous situation.

Molly Lansing-Davis (Haley Pullos) will be part of all the Cyrus drama. As TJ Ashford (Tajh Bellow) remains missing, Molly will face a turning point. Perhaps that’ll be the moment Molly takes matters into her own hands and perhaps endangers herself in the process. Brando Corbin (Johnny Wactor) will be called on for help, but he may worry about Molly’s risky involvement.

Meanwhile, Brook Lynn Quartermaine (Amanda Setton) will try to jumpstart her recording career once more. If you thought Brook Lynn and Lulu Spencer’s (Emme Rylan) feud would die down, think again! These rivals are just getting started, so General Hospital viewers will see more confrontations along the way.

Elsewhere, Cameron Webber (William Lipton) will have to look in his heart and decide what he really wants. The same goes for Trina Robinson (Sydney Mikayla), who recently shared a kiss with Cam. Joss may get stuck in the middle and make things messier, but Trina and Cameron’s mutual trauma will indeed leave them pondering their bond.

Over with Sonny Corinthos (Maurice Benard), he’ll prepare for the end of Mike Corbin’s (Max Gail) life and launch plans for Cyrus’ destruction. Sonny will find himself feeling overwhelmed, which could bring unexpected problems. As for Portia Robinson (Brook Kerr), she’ll catch Curtis Ashford (Donnell Turner) off guard with how much she seems to know about Marcus Taggert’s (Real Andrews) old transgressions.

Of course, the mystery of Nina Reeves’ (Cynthia Watros) necklace will also be a hot topic this spring. General Hospital spoilers say the origin of that necklace will be revealed, so it sounds like we’ll learn who’s got the other half of the pendant soon. As other updates roll in, don’t forget to check back for exciting news.

That’s it for your sizzling spring preview! GH fans will be eager to see all these shockers and a whole lot more in the weeks ahead. CDL will have the best scoops, so you can always stop by for more General Hospital spoilers, updates and news.