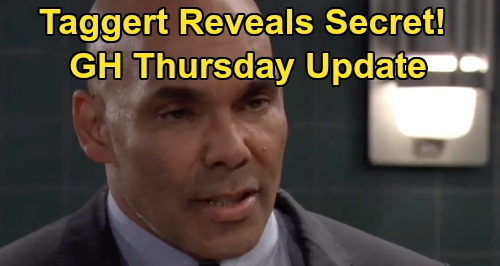 General Hospital (GH) spoilers update for Thursday, February 6, teases that Sonny Corinthos (Maurice Benard) will want to get a few things straight with Cyrus Renault (Jeff Kober). Sonny just arrived to see Cyrus in Pentonville, but this obviously won’t be a pleasant visit. After Sonny insists Cyrus made a big problem for himself, Cyrus won’t think it has to be that way. He’ll feel like they could be assets to each other if they joined forces.

Of course, Sonny will shut down that idea immediately. He’ll refuse to form an alliance with the man behind the life-threatening attacks. Sonny has to put his family first and make sure they stay protected.

Cyrus can’t be trusted and deserves to pay for what he’s done in Sonny’s eyes. Once Sonny clarified his stance, he’ll leave and prepare for the next round of battle.

Over with Jason Morgan (Steve Burton), he’ll pass along some news to Michael Corinthos (Chad Duell). Michael’s been busy tackling the current Quartermaine crisis, which Nelle Benson Archer (Chloe Lanier) is at the center of. He’ll move from that drama to the Corinthos chaos, but Jason will promise everything’s under control – or at least it will be soon.

Michael will hear about Cyrus and his decision to target Sonny. He’ll have lots of questions and concerns, but Jason and Sonny will do everything they can to make sure Cyrus is destroyed.

As for Laura Collins (Genie Francis), she’ll tell Kevin Collins (Jon Lindstrom) and Curtis Ashford (Donnell Turner) that she was just collateral damage. Laura will insist she was in the wrong place at the wrong time, but she thankfully survived.

Next, Marcus Taggert (Real Andrews) will get grilled about his agenda. Jordan Ashford (Briana Nicole Henry) will wonder if he really came to Port Charles because she asked or because he wanted to take down Sonny.

Taggert will promise this isn’t about bringing Sonny to justice – although he surely wouldn’t mind. He’ll indeed want to help Jordan, but he may have other ulterior motives for his return.

After all, the timing of Taggert’s comeback is awfully suspicious. Could Taggert be interested in dismantling Cyrus’ empire? Is there be a connection between Taggert and Brando Corbin (Johnny Wactor)? Plenty of drama erupted as around the time Taggert came on the scene, so there’s probably more to the story.

Other General Hospital spoilers say Sam McCall (Kelly Monaco) will push Hamilton Finn (Michael Easton) for the truth. She’ll think Finn needs to give whatever incriminating info he has on Peter August (Wes Ramsey) – and she’ll indeed suspect he has some.

Finn will be torn between protecting his relationship with Anna Devane (Finola Hughes) and protecting everyone else from harm, but he’ll ultimately provide some dirt.

It looks like Finn will bring Sam up to speed on Peter and the gunman’s mutual stint at Eurotech, a DVX front company. Although this may not be enough to sink Peter, it should be a step in the right direction.

Meanwhile, a family reunion will get underway at Turning Woods. Lucas Jones (Ryan Carnes) just woke up from his coma, so his loved ones will gather to celebrate and see how he’s doing.

GH fans will recall Brad divulged the truth to Lucas just before the accident. He blurted out that “Wiley” was Michael and Nelle’s son, so he’ll be nervous about how much Lucas will remember.

It turns out Lucas will draw a blank on that part of the night, so Brad will breathe a sigh of relief. However, Julian Jerome (William deVry) will make it clear that Brad had better not do anything to blow this. If Brad goes down, Julian has no intention of going down with him.

GH spoilers say Willow Tait (Katelyn MacMullen) will eventually want to check on Lucas, but she’ll feel a bit out of place. She won’t want to intrude, particularly since Brad chewed her out and fired her the last time they talked.

Lucas, on the other hand, will love this whole nanny plan. He’ll think Willow’s the perfect person to care for “Wiley” while he recovers, so he’ll rehire Willow and add to Brad’s problems.

On the bright side, Lucas is awake and that still inches us closer to the big reveal! General Hospital spoilers say Lucas will have memory flashes down the road, so it’ll be interesting to see if those lead him to the truth.