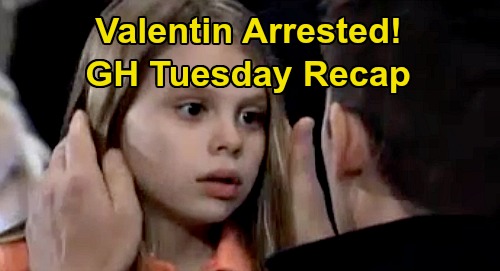 General Hospital (GH) spoilers recap for Tuesday, January 7, reveal that Nina Reeves (Cynthia Watros) prepared to leave Wyndemere but was intercepted for a scotch by Jasper “Jax” Jacks (Ingo Rademacher). Nina noted that revenge felt terrible, just like Jax said that it would.

Soon, Jordan Ashford (Briana Nicole Henry) and Curtis Ashford (Donnell Turner) came in, and Jordan announced that she had a warrant for Valentin Cassadine’s (James Patrick Stuart) arrest for fraud, tampering with a corpse, and possibly attempted murder. Nina didn’t want to stick around, so she and Jax left while Jordan and Curtis went to search for Valentin.

Laura quickly put together that Ava must have the codicil, which is what this marriage is about. Nikolas wanted his family’s blessing, but neither Laura nor Lulu would give it.

Later, Ava was alone preparing for her wedding, when Laura came in. In tears, Laura went on, realizing as she did that Nikolas must have haunted Ava at Shadybrook, and she lamented that her son was acting like a Cassadine.

Ava said that she and Nikolas were a match, and Laura said that’s what she was afraid of before leaving.

Up in Charlotte Cassadine’s (Scarlett Fernandez) room, Peter August (Wes Ramsey) told Valentin that he wasn’t going anywhere with Charlotte. Valentin then asked Maxie Jones (Kirsten Storms) to take Charlotte into the corridor so he could talk to Peter.

Valentin violently kneed Peter in the stomach, disabling him, and then went into the corridor and got Charlotte. Maxie raced into the room to find Peter on the floor.

Pretty soon, Lulu arrived to find Charlotte missing, and Peter and Maxie relayed what had happened. Lulu then went to find Jordan to have her arrest Valentin for kidnapping. Downstairs, Valentin and Charlotte escaped through the tunnels, with Charlotte taking Nina’s bouquet with her.

She didn’t realize, however, that one of the flowers fell to the floor. Later, Lulu found the flower and realized that Valentin took Charlotte through the tunnels.

A bit later, Kevin Collins (Jon Lindstrom) talked with Nikolas near the fireplace and suggested that he call Spencer Cassadine (Nicolas Bechtel) – he tried but Spencer didn’t answer. Laura then arrived, and Nikolas asked her to stay for the wedding. She refused, and after everyone was gone, Ava and Nikolas got married.

At the coffee shop, Jax told Nina that he booked a room for her at the Metro Court. She openly wondered what would have happened had Nikolas and Ava come in five minutes later – she might have married Valentin. Nina asked why Jax helped Nikolas, and he said it was because of Spencer.

But he also said that good didn’t triumph when Nikolas won tonight. He said that the Cassadines could make their own misery, and that Nina has better things to look forward to.

Anna noted that she didn’t find anything “ actionable” in the file. Finn later questioned her about that statement, noting that she indeed found something.

Later, Valentin and Charlotte emerged in the park from the tunnels, only to bump right into Anna, who wondered what they were doing since the wedding was tonight. He made an excuse, but then Lulu, Jordan, and Curtis appeared on the scene, demanding that Valentin turn over Charlotte.

Nina and Jax appeared and Nina sadly watched the goings-on. Anna talked Valentin into handing over Charlotte, and Jordan arrested him.

In the Corinthos kitchen, Carly Corinthos (Laura Wright) disconnected from Jax, then updated Sonny Corinthos (Maurice Benard) about what had happened at Nina and Valentin’s wedding, including that Nikolas’s existence was now known.

Sonny wanted to know what came next for the two of them, and they were about to discuss when Gladys Corbin (Mel Harris) interrupted. Carly got ruffled and pointed out to Gladys that the holidays were over.

At that moment, one of Sonny’s men came in and pulled Sonny away. Turns out one of their trucks was hijacked, but Sonny told the man to leave it where it was found on the side of the road, so the cops can find it – it’s always good to let the cops know that he’s a legitimate businessman.

When Sonny went back in, Gladys wanted to know what was going on, but Sonny said it wasn’t her business.

Carly then took the opportunity to give Gladys a monologue about boundaries, and about how she shouldn’t take advantage of their hospitality. Sonny sternly told Gladys goodnight, clearly signaling her to leave.