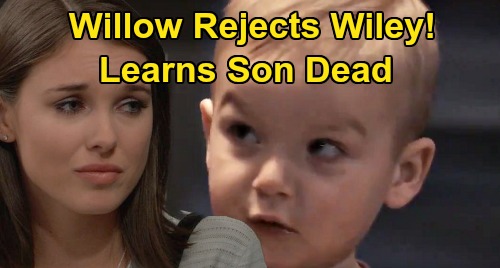 General Hospital (GH) spoilers tease that Michael Corinthos (Chad Duell) will soon take “Wiley Cooper-Jones” (Erik and Theo Olson) to raise as his own. That’s because “Wiley” IS Michael’s own! A sweet father-son reunion is coming up after all the big reveal chaos winds down, so that’s something to look forward to.

Whether this kid goes by “Wiley” or Jonah Corinthos, one thing’s for sure: Michael will be committed to giving him the best future he can. He’ll naturally feel bad for Lucas Jones (Ryan Carnes), who was an innocent victim in all of this. Michael will also hate that Willow Tait (Katelyn MacMullen) was deceived about her own child, who died shortly after he came home from the hospital.

Willow fought desperately against Shiloh Archer (Coby Ryan McLaughlin) and kept “Wiley” out of his hands. Lucas acknowledged that in a recent chat with Willow and even asked her to be “Wiley’s” alternate guardian. If something ever happened to Lucas and Brad Cooper (Parry Shen), Lucas knew he could trust Willow to care for “Wiley” – the kid she fully believes is hers.

Sadly, the real “Wiley” is dead, so Michael’s heart will break for Willow. He’ll be dealing with a lot of anger in the aftermath, but he’ll also be overjoyed to have his son back. Michael will get that Willow’s dealing with total devastation instead, so he may assure Willow that she can still serve in a motherly role. He’ll do whatever he can to make this difficult time more bearable.

During the week of February 24-28, Willow will deliver a shocker. She’ll do something that stuns Michael, so what will that be? Could Willow turn down Michael’s offer and try to shut “Wiley” out? Willow might initially reject the idea of being in the kid’s life after all this. She might insist on cutting ties since she has no biological connection to “Wiley” at all.

Of course, this would just be an initial reaction from Willow. She’ll be in a lot of pain, so nobody can tell her the right or wrong way to grieve. Willow could easily change her mind in time and bond with “Wiley” again. This could just be Willow’s way of coping in the beginning and that’s OK. Her heart will need time to heal, so perhaps taking a step back form the situation is for the best.

Even so, Michael’s heart could break even more if Willow takes herself out of the equation. Willow’s pain should leave Michael even more furious over this baby swap and its key players. General Hospital spoilers, updates and news say Michael will seek justice for himself and everyone else who was wronged. GH fans can expect Michael to take charge along with livid Sonny Corinthos (Maurice Benard)!

It sounds like some fantastic General Hospital drama’s coming up. CDL’s your hotspot for all the latest news and updates, so be sure to check back frequently. We’ll have all the newest General Hospital spoilers for you.