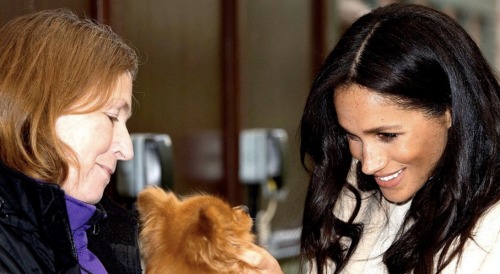 Meghan Markle is reportedly upset over how the Palace has fired back in response to an article in Tatler about Kate Middleton. The article, which was entitled “Catherine the Great,” made various disparaging remarks about Kate, including that she was exhausted from performing extra duties since Meghan Markle and Prince Harry’s move across the pond.

Well, the Palace has made its displeasure over the Tatler article known, putting out a public statement calling the magazine’s claims “a swathe of inaccuracies and false representations” and sending threatening legal letters to the publisher, demanding that the digital version of the article be removed immediately. Tatler had patently refused.

According to the Daily Mail’s sources, Meghan Markle has complained about the way that the Palace is handling the Tatler story, in large part because she feels that she never got the same sort of fierce protection that Kate is now enjoying from the Palace.

Meghan reportedly thinks that Kate “snaps her fingers” and gets quickly supported by the Palace, but back when Meghan was getting horrible press, she got no support.

The source went on to say: “Meghan said Kensington Palace never once came to her defense when she was being shredded by the media. Now Kate gets a bit of negative press, and the Palace comes out in less than 24 hours to rebuke the claims made against her.”

Meghan reportedly has told friends that she received scores of negative stories about her during her royal tenure, and that the Palace did nothing about it, despite being asked to by Prince Harry.

This has been said to have resulted in Prince Harry and Meghan Markle stepping back from their royal duties and moving to Canada, then to Los Angeles.

The source also said: “This is really a slap in the face for Harry because he repeatedly asked for an updated, revised media policy or at least a conversation about his concerns. All fell on deaf ears and then Kate comes along, snaps her fingers, and gets an outpouring of support.”

It seems that when Meghan and Harry complained about the scathing press coverage, they were made to feel like they were “asking too much, expecting too much” when all that Meghan really wanted was support from the Palace.

This comes after Meghan has reportedly complained about Kate also not being supportive of her during her many low points while she was still a senior member of the royal family. A source said that Meghan never felt really welcomed by Kate Middleton, nor made to feel like she was part of the family.

Of course, at this point, Meghan Markle and Prince Harry are far away from the situation, yet the hurt feelings and perception of unequal treatment still seem to persist.

But given that Tatler doesn’t appear to be willing to pull the article from the internet, the Palace’s complaints don’t mean much…except apparently to Meghan. Be sure to check back here at CDL for more British royals news and updates.