Kate Middleton Disparaging Tatler Article Linked To Meghan Markle – Is Meghan Fighting Back Through The Press? 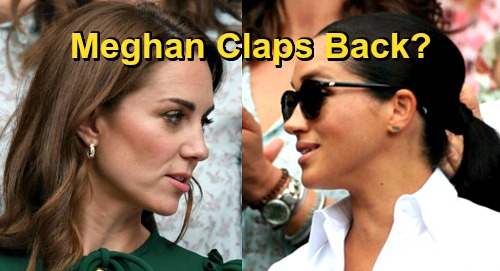 British royals news reveals that reports claim Meghan Markle may be using her connections to push back a bit against Kate Middleton and the Palace in general, and it all has to do with a recent article in Tatler that was all about Kate Middleton – an article that Kate and the Palace didn’t at all appreciate.

The article, titled “Catherine the Great” contained claims about Kate and her family that the Palace has claimed were “a swathe of inaccuracies.” The claims included statements that Kate was exhausted because of additional royal duties she has to perform now that Prince Harry and Meghan Markle have stepped back from the royal family.

In addition, the article said that Kate was perilously thin, and that she and Meghan had a big falling out over whether Princess Charlotte should wear tights during Meghan’s wedding to Prince Harry two years ago.

It would be an understatement to say that the article has caused serious turmoil within the Palace, as the Palace has sent threatening legal letters to the publication and issued a public statement denouncing the article’s claims.

As a source told the Sun: “Pasternak is sticking to her story and saying her sources are good. She is very well-connected in the US. She is friends with Vanessa Mulroney who used to work at Tatler and now lives in Canada. And Vanessa’s sister-in-law Jessica is Meghan’s best friend. It’s intriguing.”

However, we should note that there has been no insinuation that Meghan spoke with Anna Pasternak or gave her information for her article. Still, it seems that people have been wondering whether the Tatler article could be a way for Meghan to fight back in the press against Kate for perceived injustices.

This comes amidst reports that Meghan feels that angry over how she and Prince Harry’s concerns about scathing press reports against them went unheard by the Palace. Could the Tatler article be Meghan’s way of clapping back at Kate for their past troubles and at the Palace for doing nothing to combat her own negative press?

If that’s the case, then Meghan has certainly succeeded in causing a kerfuffle at the Palace and with Kate Middleton and Prince William, who are not at all pleased with the Tatler article. Be sure to check back here at CDL for more British royals news and updates.