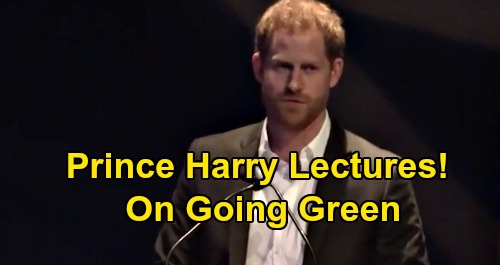 British royals news reveals that several folks aren’t happy with some of Prince Harry’s recent comments about environmental matters. It seems that what Harry might have thought were innocent and encouraging comments about the travel industry and the environment came across very differently, and even offensively, to some.

Prince Harry gave a speech recently, appearing via live video feed from Los Angeles to give the opening remarks at a virtual global summit for Travalyst, his sustainable tourism project. During the remarks, Prince Harry urged the travel industry to “build back better” after COVID-19, saying that the industry has a responsibility to reshape the way we travel.

Well, shortly after the address, former transport minister Norman Baker spoke out, saying that Prince Harry was simply the wrong person to lecture others on the “right” way to travel. Baker told The Daily Mail that he thought Prince Harry’s credibility on the topic is lacking “over his own jet setting, which undermines his case.”

Baker continued, saying: “The message is fine, but the messenger is wrong – it’s like a carnivore advocating vegetarianism.” This all comes after both Prince Harry and Meghan Markle have been criticized for flying around on private jets while simultaneously urging others to reduce their carbon footprints.

Harry and Meghan were similarly criticized several weeks ago for choosing to ride around in a gas guzzling SUV in their new home of Los Angeles.

But Baker wasn’t the only person to be upset by Prince Harry’s comments. Travel blogger Pamela RG referred to Prince Harry as “tone deaf” during this time when people are “still suffering with infection or dying and unemployment.”

And it seems that she has a point – at a time when the travel industry is suffering and laying off workers right and left, it might not be the time to discuss the responsibility for green travel.

Of course, part of the problem here is no doubt that Prince Harry is lacking the positive public perception that Prince William is enjoying right now.

As many royal observers have noticed, Prince William and Kate Middleton’s public perception right now is sky high, and that’s likely because their public appearances lately have been designed to show empathy for those on the front lines and those affected by the coronavirus shutdowns.

The same just can’t be said for Prince Harry or Meghan Markle, so it likely makes statements like those that Harry gave recently seem all the more galling.

We should also note that Prince Harry’s video appearance marked his first public appearance since excerpts from the explosive book “Finding Freedom” by Omid Scobie and Carolyn Durand started being published. Harry did not comment about or mention the book during his Travalyst summit.

Prince Harry and Meghan Markle are surely gearing up for more of a news blitz as “Finding Freedom” is set to publish in just a few days. Something tells us that they’ll be in for far more criticism going forward. Be sure to check back here at CDL for more British royals news and updates.