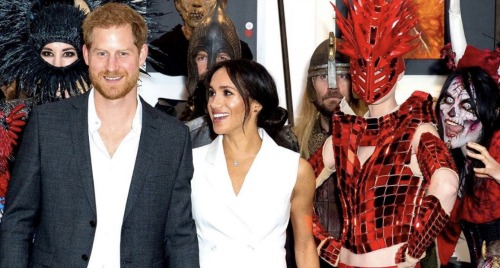 As you might know, Prince Harry and Meghan Markle have been living in the Hollywood Hills, as they’re currently staying at Tyler Perry’s mansion there. The Daily Beast has reported that Harry and Meghan have become concerned after several incidents at the home, in which drones have buzzed onto the property, purportedly to get photographs of them and their son Archie.

At least five drone incidents have been reported to the LAPD at the residence, and the drones are thought to be operated by the paparazzi. However, it could be virtually anyone who owns and operates the drones, and that’s a pretty scary thought for the Sussexes, considering that Meghan has been the victim of racist threats, including death threats, in the past.

In a recent drone sighting on and around the property, Prince Harry and Meghan Markle were sitting poolside with Archie when a drone flew around and most likely tried to snap pictures of the outing.

This comes as the same time as the couple has experienced paparazzi aggressively following them in their car as they’ve attempted to deliver meals for their charity work.

Well, as it turns out, photographs taken by drones tend to be not the best photographs, and they’re exceedingly difficult for the paparazzi to sell, assuming that they are good photographs.

Yet still Meghan and Harry are experiencing drones more and more frequently, as the paparazzi seem to be using the drones to keep up with what the Sussexes are doing in and around the home. The paparazzi can report on that without needing to sell the pictures, it seems.

At any rate, Prince Harry and Meghan Markle aren’t happy about the situation, apparently having thought that their move to Los Angeles would help them to avoid some of the nonstop scrutiny that they experienced back home. Yet that doesn’t seem to be the case, as the Los Angeles paparazzi is relentless as well.

And some critics have said that the couple should have known to expect a high level of press activity in Los Angeles. This has reportedly led Harry and Meghan to become upset by the insinuation that they have invited press intrusion into their lives by moving to the Los Angeles area.

But given the state of technology, it looks like Prince Harry and Meghan Markle will have to continue putting up with the drones for the time being – like it or not. Be sure to check back here at CDL for more British royals news and updates.