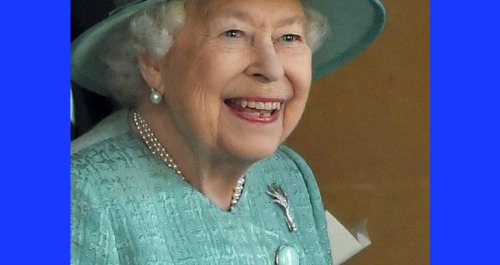 British royals news reveals that Queen Elizabeth has made quite a fashion statement in her first public appearance since the coronavirus lockdown began. As you might be aware, the Queen celebrated her 94th birthday with the annual Trooping the Colour ceremony. Traditionally, the celebration is had at Buckingham Palace with big crowds and other members of the Royal Family present on the palace balcony.

But this year, due to social distancing and safety protocols in place due to the lockdown, the Trooping the Colour ceremony was a scaled-back event, with the festivities taking place at Windsor Castle.

There was still a military display, but it was much smaller than in recent years and it was performed by the 1st Battalion Welsh Guards who are currently on guard at Windsor Castle.

Queen Elizabeth appeared at the event wearing a festive teal outfit, but she was unable to be accompanied by other members of the Royal Family due to the lockdown. It’s reported that Prince Philip may have watched the event from a palace window, and that Prince William and Kate Middleton and their family watched the celebration on television.

Well, this year, Town & Country Magazine made an interesting observation about Queen Elizabeth and a special nod that she made to the 1st Battalion Welsh Guards. It seems that for decades, the Queen has worn the same brooch for the Trooping the Colour celebration.

It’s called the Brigade of Guards brooch, and the diamond piece includes emblems from the five household regiments – the Coldstream Guards, Grenadier Guards, Irish Guards, Scots Guards, and the Welsh Guards. That brooch is said to have been likely made from a pendant once owned by Princess Mary, who was Queen Elizabeth’s aunt.

But this year, for the special scaled-down festivities, Queen Elizabeth wore a different broach. It is described as a diamond leak-shaped brooch that was given to her by the Welsh Guards who performed the Trooping the Color ceremony this year. This is a major change for the Queen, whose change in jewelry is said to be significant.

The special broach could be plainly seen against the Queen’s teal outfit. Queen Elizabeth wore a matching teal hat, white gloves, and black heels…and of course, the special brooch to mark the occasion. You can see the brooch clearly in photos from the Trooping the Colour ceremony.

Of course, next year, when things will hopefully be back to normal from a social distancing perspective, it will probably be back to the big ceremony and the traditional Guards broach. But for this year, it was nice to see Queen Elizabeth mark the change. Be sure to check back here at CDL for more British royals news and updates.