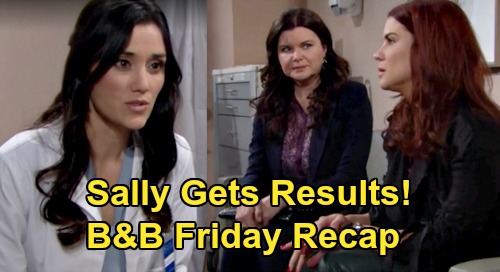 The Bold and the Beautiful spoilers recap for Friday, February 7, reveal that Katie Logan (Heather Tom), who was at Spencer Publications, called Sally Spectra (Courtney Hope) as she sat designing in the Forrester Creations design office. Katie wondered if Sally had heard from the doctor yet, but she hadn’t. Katie pledged to be there for Sally and support her.

Wyatt Spencer (Darin Brooks) then came in the design office and Sally hung up. Wyatt said that he had been worried about her and just wanted to see how she was doing.

Sally rambled a bit about the last time they talked and how she wasn’t prepared for the “breakup” conversation, and Wyatt let her know that he cared about her and that would never change.

Sally’s phone then rang, and it was Dr. Escobar (Monica Ruiz) calling. She relayed that she’d have Sally’s test results within the hour, and she’d like Sally to come into the office.

Afterwards, Wyatt asked if everything was ok, and Sally said that everything’s fine. Still, Wyatt was skeptical and could sense that something wasn’t right with Sally.

Wyatt then reiterated that he’d always care about Sally, and that she could always come to him for support. He said that he hated it that he hurt her, and that she was way too important to him to be gone from his life forever.

Wyatt then left, still sensing that something was wrong, while Sally flashed back to happier times and to when Wyatt proposed marriage.

Meanwhile, at the Forrester mansion, Shauna Fulton (Denise Richards) visited with Quinn Forrester (Rena Sofer), who was thrilled to see her friend again. The two gushed about Wyatt and Flo Fulton (Katrina Bowden) getting back together, and they touched on the feud between Brooke Forrester (Katherine Kelly Lang) and Quinn.

Sally’s name came up in conversation as well, and both Quinn and Shauna agreed that Sally needed to accept that her relationship with Wyatt was over, and that Sally was a survivor. They thought that Flo and Wyatt had missed out on so much, and that now was their chance to shine. Quinn then said that Sally’s days were numbered when it comes to Wyatt.

At Spencer Publications, Bill Spencer (Don Diamont) and Katie kissed happily and discussed how well Katie was doing health-wise. Katie said that she loved every minute of having Bill and Will Spencer (Finnegan George) waiting on her hand and foot, and she took the time to enjoy Bill’s attentiveness.

Bill then wondered how Katie’s doctor’s appointment went, and Katie flashed back to finding Sally at the hospital.

Bill worried that Katie was keeping something from him, as Katie insisted that everything was fine with her health and that nothing was wrong. Still, Bill could see that something was weighing on Katie. Katie then left, saying that there was someone she needed to go see.

Later, Katie arrived at Forrester to see Sally and let her know that she’s here. Sally relayed that the doctor just called and that she was headed over to the hospital. Katie insisted on going with her, saying that she needed a support system.

Back at Spencer Publications, Wyatt entered Bill’s office, and Bill tried to needle him, but he could tell that something was upsetting Wyatt. Wyatt said he had just come from Forrester Creations and had seen Sally, and that she was not dealing with things well.

At the doctor’s office, Sally and Katie waited, with Sally in clear distress. Sally remarked that her life could be over, but Katie encouraged her not to imagine worst-case scenarios. Sally then asked Katie not to say anything to Wyatt about any of this, and Katie promised.

Dr. Escobar eventually came in the room and said that she was up to speed on Sally’s chart. She asked how Sally had been feeling recently and if she was experiencing the same symptoms, which Sally confirmed that she had been.

Sally noted that it was really difficult waiting for the results, and she asked if Dr. Escobar had the results. Dr. Escobar said that she did, and Sally asked, “What do the results say? Am I ok?”