BY Heather Hughes on May 6, 2020 | Comments: Leave Comments
Related : Soap Opera, Spoiler, Television, The Bold and the Beautiful 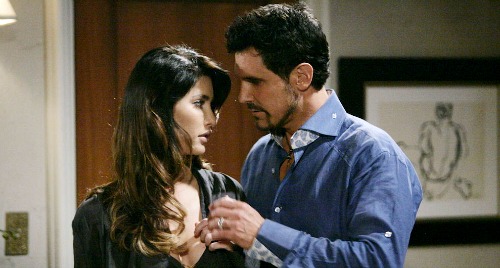 The Bold and the Beautiful (B&B) spoilers reveal that Jacqueline MacInnes Wood (Steffy Forrester) showed “Still” fans some love in a recent Instagram story. B&B viewers will recall how Steffy cheated on Liam Spencer (Scott Clifton) with his father, Bill Spencer (Don Diamont). It blew up their marriage in a big way, but Wood has been a vocal supporter of the soapy twist.

Wood included some fun throwback wedding pics in her Instagram story, but there were a couple in particular that Bill and Steffy shippers loved. One of them showed Steffy kissing Bill’s cheek as Liam looked on. Another pic featured Bill and Steffy, but the caption is what really had fans buzzing!

“When she said ‘I do’ to Liam.. but she wanted to do Bill….waiiit WHATT,” Wood said. It was a funny nod to the betrayal that would come later for Steffy. Of course, that pairing offered some serious sizzle. Steffy and Bill brought some real head in the bedroom, and Don Diamont has always been enthusiastic about giving “Still” another chance.

Will Bill and Steffy get that chance one day? Could B&B let them pursue a real romance? You never know since this is a soap and they have to keep the drama going for years. Most pairings tend to come back around sooner or later. There’s always a possibility that The Bold and the Beautiful will let Bill reignite his spark with Steffy at some point.

Regardless, B&B fans had some fun with Wood’s “Still” support. “Yes, #JacquelineMacInnesWood Steffy can #STILL do Bill……again and again and again,” one Bold and the Beautiful viewer said on Twitter. “STILL love from the Queen herself,” said another.

Would you like to see Bill and Steffy as a real couple? It would inevitably spark major conflict with Liam Spencer (Scott Clifton) – and more drama is a good thing on soaps! Whatever happens, The Bold and the Beautiful spoilers say the action’s sure to rev up.

CDL will have other news and updates for you, so check back regularly. B&B will keep offering great classic episodes until the cast and crew can get back on set. More new episodes are coming down the road, so stick with us for the hottest Bold and the Beautiful spoilers, updates and news.