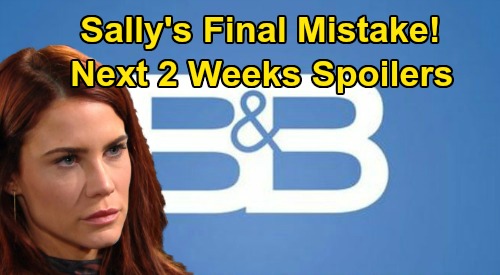 The Bold and the Beautiful (B&B) spoilers for the next two weeks tease that we’ll see some heated arguments and devasting blows. During the week of March 23-27, Katie Logan (Heather Tom) will warn Flo Fulton (Katrina Bowden) about her visit to Sally Spectra (Courtney Hope). Katie will bicker with Flo about whether this is really a good idea, but Flo will insist that they need to talk.

Of course, Sally’s illness will be out in the open – at least from Flo’s perspective. Flo will hear the latest news from Wyatt Spencer (Darin Brooks), but neither one of them will know Sally’s been faking her terminal diagnosis.

Flo will want to discuss the secrets they’ve all been keeping, including the fact that she knew about Sally’s grim fate and was still technically with Wyatt.

Later, Flo will feel like something’s off about Sally’s affection for Wyatt. Sally’s intentions will be questioned, so this should set up Flo’s journey toward the truth. The Bold and the Beautiful spoilers say Sally may have her work cut out for her if she wants to avoid exposure.

Donna and Brooke will be desperate to erase this video before anyone else sees it, but their efforts will be futile.

That’s because Quinn Forrester (Rena Sofer) will prove she’s a twisted mastermind soon enough. Quinn will taunt Brooke over this secret kiss and drop a hint about blackmailing her.

Brooke won’t stand for that, but it won’t matter anyway. Quinn’s real goal will be to destroy Brooke, so she’ll be eager to go ahead and make this lip lock public knowledge.

Next, Bridget Forrester (Ashley Jones) will make a surprise trip back to Los Angeles. Bridget will want to be part of Brooke and Ridge’s reunion festivities, but this party’s about to explode.

After Brooke briefly goes missing to face off with Quinn, she’ll reappear and hope the situation’s under control. It turns out Brooke will be very wrong about that!

The Bold and the Beautiful spoilers say Quinn will move forward with the final phase of her scheme. Bill and Brooke will reel as Quinn makes sure every guest sees their make-out session.

The result will mean some broken hearts – namely, Ridge and Katie’s. They’ll be absolutely crushed once they learn what Brooke and Bill have been doing behind their backs.

During the week of March 30-April 3, Brooke will surely try to repair the damage. You can bet Bill will do the same, but Ridge and Katie may be too hurt to even think about making up. The wound will be awfully fresh at that point.

As for Quinn, she’ll be quite pleased with her handiwork. Quinn will reflect on the destruction she caused and love that she got to be such a huge part of it.

Other B&B spoilers say Shauna Fulton (Denise Richards) will think it’s best if she leaves town. Shauna won’t want to sit around pining for Ridge, so she’ll plan to head back to Vegas. Will Ridge show up to change Shauna’s mind?

That’s one option to consider. It’s also possible Quinn will give Shauna some last-minute updates and talk her into sticking around.

The secret is out, and Quinn’s blackmail has just begun! You won’t want to miss #BoldandBeautiful this week! pic.twitter.com/2fYcrZSFPi