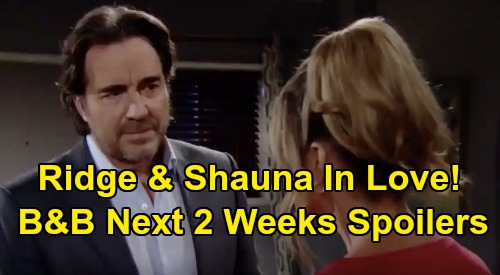 The Bold and the Beautiful (B&B) spoilers for the next two weeks tease that we’ll see some broken hearts and fierce fights. During the week of March 30-April 3, Ridge Forrester (Thorsten Kaye) will reject Brooke Forrester’s (Katherine Kelly Lang) repeated attempts to seek forgiveness. After Ridge maintains that he’s done for good, Quinn Forrester (Rena Sofer) will point him in another direction.

Quinn’s rooting for Ridge and Shauna Fulton (Denise Richards) to get together, so she’ll let him know her bestie’s about to leave town. If Ridge wants Shauna in his life, Quinn will think he has to stop her from returning to Vegas. It turns out Ridge will take Quinn’s advice, but it won’t work out exactly like he expects.

Shauna will hear the “Bridge” breakup news and most likely apologize for making the video at all. However, Ridge will be glad he knows where things truly stand with Brooke. He’ll probably feel like Shauna helped open his eyes, even if she didn’t mean for the truth to get out.

The Bold and the Beautiful spoilers say Ridge will beg Shauna to stay in Los Angeles, but she won’t be interested. If Shauna sticks around, she’ll feel like Ridge is just going to use her to get over Brooke.

Ridge will ultimately determine that if Shauna’s going to Vegas, then he’s going with her. There’s no way Ridge can stand by and let Shauna leave like this.

Back with Brooke, she’ll sink to the lowest of lows. Bill Spencer (Don Diamont) will be in a dark place as well as Katie Logan (Heather Tom) remains outraged. The Bold and the Beautiful spoilers say Katie will once again lash out at Bill, who’ll be desperate for a chance to rebuild trust.

Bill will plead for forgiveness and an opportunity to prove himself to Katie. No matter what she decides, Bill will plan to fight for his family with Katie and Will Spencer (Finnegan George). Meanwhile, Sally Spectra (Courtney Hope) will eavesdrop on Wyatt Spencer’s (Darin Brooks) discussion with Flo Fulton (Katrina Bowden). Whatever Sally hears will convince her to take an intriguing step to handle Flo.

The Bold and the Beautiful spoilers say a special delivery’s on the way for Flo. Sally will send Flo something that’s sure to catch her romantic rival off guard. As for Dr. Penny Escobar (Monica Ruiz), the pressure will keep rising. Penny will feel like she’s in deep trouble as Sally becomes even more of a problematic patient.

Flo will visit Penny with the intention of scoring information. When Flo tries to make Penny spill, it’ll leave the doc in a real bind. Flo will be determined to get additional answers about Sally’s illness, so Dr. Escobar will have to think fast.

As for Steffy Forrester (Jacqueline MacInnes Wood) and Zoe Buckingham (Kiara Barnes), they’ll have a heart-to-heart. There’ll surely be plenty of Thomas Forrester (Matthew Atkinson) talk and reassurance that they’re all moving on. Zoe and Steffy will also weigh in on this awkward situation Wyatt, Flo and Sally are dealing with.

During the week of April 6-10, Sally will make a pitch to Wyatt. The Bold and the Beautiful spoilers say Sally will push for some type of tradeoff that could work in her favor. Sally’s quid pro quo idea could leave Wyatt taken aback, but he may be pleased that Sally’s in good spirits. Since Wyatt still believes Sally’s dying, he may end up doing just about anything she asks.

In Sin City, Ridge and Shauna will have a wonderful time together. It’ll be nice for them to take a break from all the chaos in LA and focus on their bond. B&B fans can expect a pact between Shauna and Ridge before this Vegas trip wraps up. No matter what the terms of this agreement are, it sounds like Ridge will manage to pull Shauna closer.