BY Heather Hughes on May 7, 2020 | Comments: Leave Comments
Related : Soap Opera, Spoiler, Television, The Bold and the Beautiful 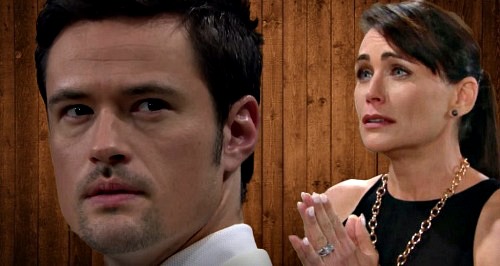 The Bold and the Beautiful (B&B) spoilers tease that Quinn Forrester (Rena Sofer) could end up being one vengeful mom after Sally Spectra’s (Courtney Hope) terminal illness scam is exposed. Quinn’s been falling back on old habits lately, so that trend may continue. Nobody hurts Quinn’s son and gets away with it!

Quinn’s bound to be furious with Sally for duping Wyatt Spencer (Darin Brooks) and trying to derail his relationship with Flo Fulton (Katrina Bowden). As far as Quinn’s concerned, Flo’s the best possible match she could imagine for Wyatt. Quinn truly believes Flo and Wyatt are meant to be, so she’ll fume over the threat Sally posed to Wyatt’s happily ever after.

Of course, there may be some new developments that make things even worse for Sally in the end. When The Bold and the Beautiful last left off, Dr. Penny Escobar (Monica Ruiz) had knocked Flo out and Sally was helping her drag Flo out of the beach house. Wyatt came home and looked shocked by the scene in the living room.

If Penny and Sally got Flo out of there in time, this could still turn into a hostage situation. Wyatt might’ve been stunned by the mess from the struggle. Sally could find a way to drag this scam out even further and reel Wyatt in as a result. The longer this plot goes on, the angrier Quinn will be when it all blows up.

Wyatt may want to forget about Sally and move on with his life, but what about Quinn? Can Mama Bear really just let something like this go? Quinn’s vengeful mind may start working on a scheme of her own – one that might give Sally a taste of her own medicine AND keep her far, far away from Wyatt.

Thomas Forrester (Matthew Atkinson) wanted to team up with Quinn on Brooke Forrester’s (Katherine Kelly Lang) takedown, but that alliance never turned into much of anything. This is B&B’s chance to bring it back. Sally deceived Wyatt, so Quinn might make a pitch to Thomas and encourage him to deceive Sally, too.

What if Quinn pushes Thomas to make Sally fall in love with him all over again and then break her heart? Thomas has a history with Sally, which would make him a good candidate for a plan like this. It wouldn’t be like starting from scratch with a brand-new hunk. Plus, deceiving women is kind of Thomas’ thing!

Quinn may consider what an excellent job Thomas did of fooling Zoe Buckingham (Kiara Barnes), who he didn’t really love. Thomas was all about getting back together with Hope Logan (Annika Noelle), but that plot was a bust. Since Thomas will need a new storyline and a new woman to hang around, taking this Sally route would work.

However, Thomas would surely have some reservations since he doesn’t hate Sally like Quinn does. Thomas will also be looking to turn his train wreck of a life around. Quinn would have to come up with some strong incentives to get Thomas involved.

Even so, Quinn’s awfully persuasive when she wants to be. She can do anything she sets her mind to, so we have no doubt Quinn could convince Thomas to dupe Sally. Naturally, this would present an opportunity for love to genuinely bloom again. Thomas might bail on the plan and forgo whatever benefits Quinn has in mind.

This could show genuine growth in Thomas and help him break free of his Hope obsession. Thomas could find love with Sally and put the woman in his life above his scheming. Maybe Quinn’s revenge could become Thomas and Sally’s happy ending!

Do you think Quinn will seek vengeance after Sally’s exposure? Could Quinn recruit Thomas to play dirty with Sally’s heart? As other B&B news rolls in, there’ll be more updates to pass along. The Bold and the Beautiful spoilers say some shakeups are looming, so fans won’t want to miss all the action. CDL’s your go-to source for Bold and the Beautiful spoilers, updates and news.