The Bold and the Beautiful Spoilers: Quinn Steals Ridge For Revenge – After Brooke Blows Up Eric Marriage? 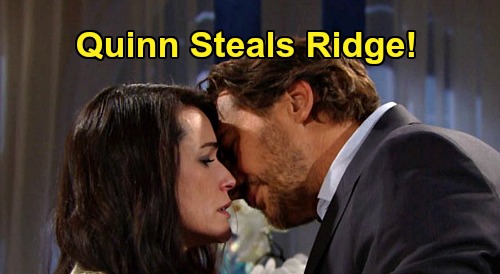 The Bold and the Beautiful (B&B) spoilers tease that Brooke Forrester (Katherine Kelly Lang) will remain furious with Quinn Forrester (Rena Sofer) for turning a private moment with Bill Spencer (Don Diamont) into a scandal. It’s Brooke’s own fault for having wandering lips, but Quinn still uploaded the video to the digital frame. Without Quinn’s involvement, this exposure wouldn’t have happened.

Brooke’s hopeful about getting things back on track with Ridge Forrester (Thorsten Kaye), but that doesn’t mean she’ll soon forget her fury over Quinn’s actions. Quinn blew things up for Bill and Katie Logan (Heather Tom), too. Brooke’s bond with her sister is ruined for the time being – and Quinn’s responsible for that in Brooke’s eyes.

Brooke’s perfect outcome would be for her to repair her marriage to Ridge and destroy Quinn’s marriage to Eric Forrester (John McCook). Eric has always faced plenty of backlash over his decision to be with Quinn, but they’ve managed to last quite a while by soap standards.

However, Brooke could influence Eric’s view of Quinn and even resort to some sabotage.

Brooke’s the kind of gal who holds a grudge, so she might work until she tears Eric and Quinn apart. Of course, that could be a huge mistake! What happens if Brooke wins her man back and makes Quinn lose her own? Quinn might set out to make Brooke pay the ultimate price.

What would be the best revenge Quinn could possibly get in that scenario? Quinn might resolve to seduce Ridge and steal him away from Brooke herself. B&B fans will recall that Ridge and Quinn were intensely attracted to each other once upon a time. They had a kissing fling and struggled to avoid temptation.

Many Bold and the Beautiful viewers actually saw some steamy chemistry between Quinn and Ridge. Sadly, “Quidge” was never given a real chance, but this might be the ideal time to try again.

Shauna Fulton (Denise Richards) doesn’t want to get hurt, she may not be willing to open her heart again. If Quinn wants another woman in the picture, she may have to be that woman.

Naturally, this could bring the possibility of Ridge and Quinn actually finding love. That’d be interesting since Quinn is Shauna’s bestie. Their friendship could become a rivalry if this kind of storyline played out. Even so, it would definitely help Quinn stick it to Brooke!