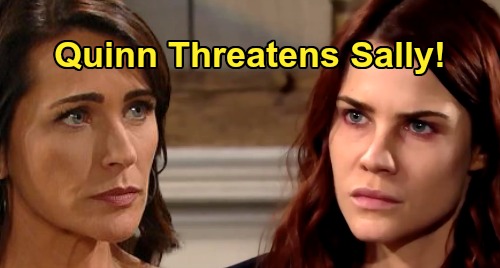 The Bold and the Beautiful (B&B) spoilers tease that Quinn Forrester (Rena Sofer) will soon find herself absolutely outraged. As B&B viewers know, Quinn is no angel, and she’s done her share of shady things throughout the years to various other characters on the B&B canvas.

But when it comes to Quinn there’s one person who she’ll do pretty much anything to protect, and that’s her son Wyatt Spencer (Darin Brooks). Quinn is fiercely protective of Wyatt, and she generally doesn’t like the women in his life because she feels that they’re not good enough for Wyatt.

Quinn especially didn’t like Wyatt being with Katie Logan (Heather Tom) and she really didn’t like his relationship with Sally Spectra (Courtney Hope). Quinn wants Wyatt with Flo Fulton (Katrina Bowden) and she practically pushed Wyatt into Flo’s arms this last time they got together.

Well, according to B&B spoilers, Quinn is going to do something pretty big in the coming days. Quinn’s going to support Wyatt in his quest to help out Sally during what are supposedly Sally’s final days on earth. Quinn will think that Wyatt is being a great friend to Sally, and she’ll even agree with Katie that Wyatt’s doing the right thing.

Of course, as B&B viewers know, Sally has moved back into Wyatt’s place to spend the final days of her life…or so Wyatt thinks. The reality is that Sally’s terminal illness is one big fake out designed to get her closer to Wyatt, and Wyatt currently has no idea that he’s being played.

But soon, Flo is going to catch on that something’s up with Sally, and eventually it looks like Flo will expose Sally as a total fraud and a liar. The gig will be up, and Sally will have to admit that she faked her terminal illness to try to salvage her relationship with Wyatt.

Well, something tells us that Sally’s going to be totally unprepared for the fallout that she’ll face when her fake death ruse comes out. Wyatt’s going to go bonkers, and of course Flo is going to be livid with Sally for trying to move in on Wyatt.

Katie should be pretty upset with Flo as well – after all, Katie got dragged into this emotional nightmare with Sally and will probably feel like a fool. But Quinn is probably going to be spitting mad with Sally when she hears the news.

While Wyatt, Flo, and Katie will be upset, they probably won’t openly retaliate against Sally in the way that Quinn will. Quinn can make just about anyone’s life a living hell, and she’ll probably set out to make Sally pay for putting Wyatt through all of this.

Of course, Quinn will also be upset that Sally tried to come between Wyatt and Flo in this very cruel way. We’ll see what Quinn ultimately does to Sally, but something tells us that there could be a big Quinn and Sally confrontation coming.

Sally will have probably lost everything at that point, but that shouldn’t stop Quinn from kicking Sally when she’s down! And knowing Quinn, she’ll probably go so far as to threaten Sally.

Quinn will probably want to make sure that Sally never goes near Wyatt again, and that she leaves Wyatt and Flo alone so they can embark on a happy life together. At any rate, whatever Quinn’s got in store for Sally, it’s probably not going to be pretty!

What do you think that Quinn will do to Sally once she finds out about Sally’s faked terminal illness? Stay tuned to the Bold and the Beautiful and keep checking back with us for the latest soap news and updates! Here at CDL, you can count on us for all your B&B spoilers, recaps, and news!