BY Heather Hughes on January 19, 2020 | Comments: one comment
Related : Soap Opera, Spoiler, Television, The Bold and the Beautiful 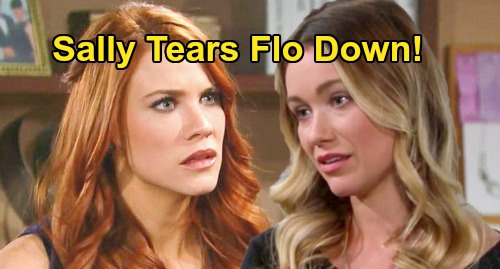 The Bold and the Beautiful (B&B) spoilers tease that Wyatt Spencer (Darin Brooks) will have a tough time getting through to Sally Spectra (Courtney Hope). Despite Wyatt’s attempt to breakup with Sally, she’ll be in denial about the end of their engagement. Sally will struggle to really hear what Wyatt’s saying.

During the week of January 20-24, Sally will do her best to fix this. She may think Wyatt simply got caught up in seeing “Flo” Fulton (Katrina Bowden) again and is making a rash decision.

Sally will do her best to remind Wyatt of what they share, but Wyatt just won’t think what they share is so great anymore. Wyatt may love Sally, but he’s not IN love with her – not like he is with Flo.

Whatever the case, Wyatt will eventually manage to break thought this denial barrier – no matter the cause. The Bold and the Beautiful spoilers say Sally will have some difficult emotions to process.

Sally had trouble opening her heart to Wyatt again after he broke up with her the first time. Sally’s mistake was quite minor compared to Flo, so the fact that Wyatt’s now forgiving and choosing Flo will sting.

Plus, Sally got burned more times than she can count by Thomas Forrester (Matthew Atkinson). She’ll feel like she’s picked some rotten men with serious commitment issues. Once Sally accepts that things are over with Wyatt, she’ll pay Flo a visit with a couple goals in mind.

For starters, Sally will likely let Flo know what she really thinks of her in an angry in-person takedown! She’s sure to judge Flo for pouncing on Wyatt and stealing his heart. Sally will also want to make her relationship status with Wyatt crystal clear.

Sally will probably insist that Flo doesn’t have to worry about her being an obstacle to their reunion anymore. Sally may suggest she’s never going to let Wyatt hurt her ever again.