BY Heather Hughes on February 27, 2020 | Comments: one comment
Related : Soap Opera, Spoiler, Television, The Bold and the Beautiful 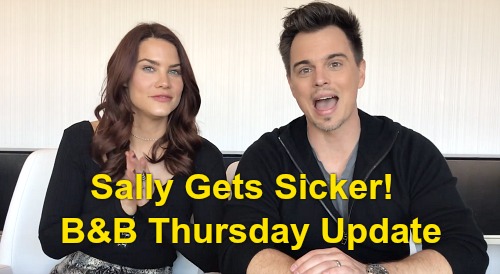 The Bold and the Beautiful (B&B) spoilers update for Thursday, February 27, teases that Wyatt Spencer (Darin Brooks) will prepare to take the next step. Now that he’s decided to be there for Sally in her final weeks, he’ll want to show a real sign of commitment. The best thing Wyatt can do for Sally is make her feel loved and secure. Wyatt will hope he can prove to Sally that he’s truly going to stand by her.

Of course, Sally doesn’t realize Katie Logan (Heather Tom) told Wyatt about her terminal illness. She just knows Wyatt wants her back in his life – and that’s an amazing feeling for someone who’s dying. Sally’s been isolating herself, so it’s warming her heart to have Wyatt supporting her like this.

The Bold and the Beautiful spoilers say Sally will battle dizziness before meeting with Wyatt again. She’ll begin to feel weak and lightheaded, so she’ll struggle to steady herself. It’ll be a grim reminder that Sally doesn’t have much time left. She’ll nearly collapse as she fights to keep living a normal life for as long as possible.

Sally will ultimately work through this rough patch and put on a smile before reconvening with Wyatt. She won’t want him to suspect anything’s wrong – although he secretly already knows.

Even if Wyatt senses Sally’s struggling, he won’t let on like he does. Instead, Wyatt will focus on the task at hand. He’ll declare his love for Sally and insist he’d like for her to move in with him.

Sally will be touched by Wyatt’s sweet speech, but she’ll be a bit wary, too. She won’t understand why Wyatt’s ready to rush right back into a reunion, especially after dumping her for Flo. Sally will feel like everything’s moving awfully fast. That works out for Sally since she only has a few weeks to live, but she should also find it suspicious.

Even so, Wyatt will say all the right things and make Sally feel wanted. She may choose to push her confusion and doubts aside eventually. What does Sally really have to lose at this point?

Sally may let herself get swept up in the romance of it all despite her concerns. She’ll grill Katie about potential secret spillage before the week’s over, but Sally will indeed be tempted by Wyatt’s offer.

Other B&B spoilers, updates and news say Flo Fulton (Katrina Bowden) will feel good about her decision. She’ll talk to Katie about what’s happening and reaffirm that it’s for the best. Flo intends to be with Wyatt once Sally’s deadly ordeal is over. She’s fine with waiting since Sally’s the one who’s truly suffering here.

Katie will connect with Flo as they discuss this great sacrifice she’s making. Since Flo sacrificed a kidney as well, Katie will definitely be proud and grateful to have her around. They’ll strengthen their bond and agree that keeping Sally happy has to be the priority.