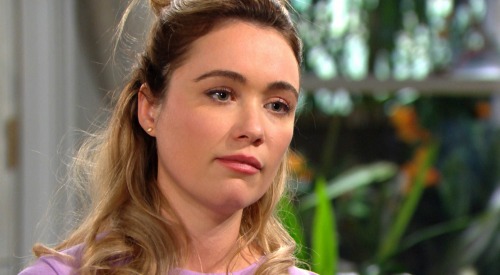 The Bold and the Beautiful spoilers recap for Tuesday, April 21, reveal that Wyatt Spencer (Darin Brooks) continued his conversation with Katie Logan (Heather Tom) and Quinn Forrester (Rena Sofer) in the Forrester Creations CEO office. Katie asked Wyatt what he was thinking by asking a dying woman to leave his house. Wyatt explained that it seemed like the right time to get Sally Spectra (Courtney Hope) to get set up at a medical facility where she could get the care she needed.

Katie kept pushing back, and Quinn defended Wyatt, but Katie wanted to know whose idea it was to have Sally move out. Wyatt noted that he and Flo Fulton (Katrina Bowden) were on the same page, and Quinn pointed out that dealing with someone in Sally’s condition can be a lot to deal with. Wyatt said that wasn’t it, and that he would keep his promise to be there for Sally in her final days.

Katie asked again if it was Flo’s idea to ask Sally to leave, and again Wyatt deflected the question, and Quinn defended him. Katie sighed sadly, saying that she didn’t think they were at “that” point yet, but Wyatt said that they were about to be. Katie pointed out that if Sally’s not ready to leave, then asking her to leave could be very painful for her.

Katie also worried that Sally might resent Flo for this, and Quinn unexpectedly agreed with Katie, saying that Flo might be acting out of the goodness of her heart, but that Sally may not see it that way.

Meanwhile, at the beach house, Flo and Sally argued. Flo called Sally a fake and said that she wasn’t really dying. Flo wondered why Sally faked her illness – was it for pity? Flo went on, ranting that Wyatt has been worried sick about Sally, and that it was all a lie. Sally tried to act indignant, saying that Flo had lost her mind, but Flo didn’t back down.

Flo noted that Wyatt was going to be furious when he found out about her fake death ruse. Sally said Flo was crazy, and Flo said Sally wasn’t sick and that she shouldn’t try to double down now.

Sally and Flo went back and forth in this fashion for a while, until Flo asked Sally to prove that she was sick, and to at least disclose what her condition was. Sally refused, saying that it as personal, and she told Flo that these accusations hurt.

Flo reminded Sally of how she jumped and ran around the room when she saw the rubber snake, and she accused Sally of wearing makeup to look sick. “If you really love Wyatt, why make up this giant lie?” Flo said.

Sally lashed out, saying that Flo couldn’t talk about her love for Wyatt. Flo asked if this was how Sally planned on holding onto Wyatt – by faking an illness.

Finally, Flo pushed enough, and Salt snapped, saying that Flo wouldn’t understand, because she’s the golden girl who steals babies and other women’s men and gets away with it. Sally ranted about how she’d had to fight for everything in her life, and that she loved Wyatt more than anything, but that she was sick of losing.

Sally then admitted that she was lying about the whole thing…because she finally decided to fight for what she loved.

There’s a lot of B&B drama heating up, so stay tuned! We’ll be sure to update you as more exciting B&B news comes in. Stick with the CBS soap and remember to keep CDL bookmarked for the latest hot spoilers and updates.