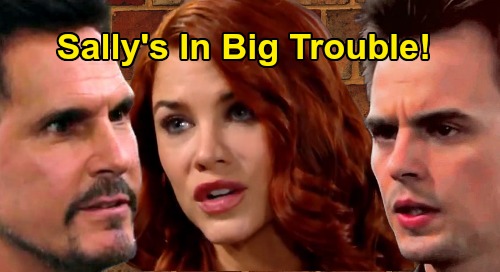 The Bold and the Beautiful spoilers tease that Wyatt Spencer (Darin Brooks) had no idea what Sally Spectra (Courtney Hope) was doing. Flo Fulton (Katrina Bowden) had an inkling that Sally wasn’t forthright. But Wyatt’s true love didn’t have any facts until this week, when she a heavy price for revealing the truth.

Meanwhile, Bill Spencer (Don Diamont) knows that he’s to blame for his living conditions. He’s no longer in his home with Katie Logan (Heather Tom) and Will Spencer (Finnegan George). Bill volunteered to move out after betraying Katie’s trust with her sister, Brooke Logan (Katherine Kelly Lang), once again.

Bill’s alternate persona hadn’t been seen in a long time. The cabin kiss wasn’t an intended event, so even that mistake wasn’t reflective of Bill’s darker side.

But Wyatt was witness to the Dollar Bill side returning. Diamont’s classic B&B character walked into his son’s office at Spencer Publications. Bill loudly lashed out at his self-inflicted circumstances, particularly noting that Wyatt’s mother, Quinn Forrester (Rena Sofer), purposely damaged his life and may have destroyed Batie.

Bold And The Beautiful Spoilers – Father And Son’s Similarities

Bill and Wyatt have been appealing to many ladies through the years. But some of the relationships they’ve been connected to became messy.

Bill obviously found Quinn to be attractive once upon a time. As hardcore fans recall, the dissension between Wyatt’s parents is long-standing and never likely to end, which explains Quinn’s lack of compassion for Bill’s current circumstances.

Within the course of approximately a year Wyatt was involved with Katie, Sally, and Flo. Wyatt broke up with Katie, amicably, Sally, roughly in both instances, and Flo once.

Wyatt’s kind-heartedness put him and Flo in danger, as they didn’t know Sally was employing a terminal illness ruse with Dr. Escobar, who bashed Bowden’s character on the back of the head. Bill’s sense of compassion led him to comfort Brooke. However, the former Brill got carried away, as the digital video documented.

There are no easy solutions for either Spencer man. And, what advice will this father, or son be able to give to the other considering the soapy circumstances? The one certainty that binds father and son when new B&B episodes resume is that Sally Spectra will soon be a marked woman! CDL is a leading source for everything linked to The Bold and the Beautiful. Check back regularly for B&B spoilers and news!