The Young and the Restless Spoilers: Is Theo Not Kyle’s Cousin After All, Dina Connection Gone – Jack’s Shocking Discovery? 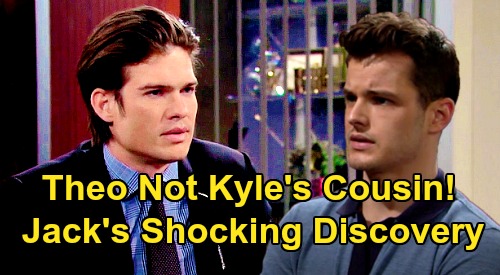 The Young and the Restless (Y&R) spoilers tease that Jack Abbott (Peter Bergman) will make a discovery that leaves him puzzled. What will that discovery be and how could it shake things up for the Abbotts? Let’s explore an intriguing possibility and see what might provide more drama.

For starters, we should consider the main themes Y&R’s pushing with Theo Vanderway (Tyler Johnson). Once Theo found out he was Dina Mergeron’s (Marla Adams) grandson and Abbott adjacent, it seemed like a bit of a turning point.

Theo remains a bad boy, but he became a slightly less obnoxious one. The show gave Theo a little more depth through that Dina connection. Although Theo still schemes, he’s had some genuinely sweet moments with Dina. Of course, Theo admittedly struggles with resentment.

He’s bitter toward Kyle Abbott (Michael Mealor), who comes from a different world and didn’t face the same challenges. Theo constantly pushes Kyle’s buttons and his motives are questionable when it comes to his interest in Lola Rosales (Sasha Calle).

Now that Dina’s home for the final chapter of her life, The Young and the Restless is focusing on Theo’s bond with his grandmother again. Theo will abuse that bond in Kyle’s eyes, but we should note that Y&R’s revisiting this Theo-Dina angle. Is there a reason for that? Could Y&R be building to a shocker?

Many Young and the Restless viewers were disappointed by Theo’s suddenly invented GC family connection. It felt forced and unnecessary. Like Y&R was trying too hard to make Theo happen!

It’s no secret that plenty of fans find Theo unlikable, but making him Dina’s grandson didn’t do him any favors. That’s the kind of thing that tends to turn viewers off to a character even more. Nevertheless, there’s always a chance Y&R could undo this connection. That’s especially true if they intend to write Theo out down the road.

Regardless, this Dina-Theo angle is back and that could mean something. In an upcoming episode, Theo will face backlash over his visit with Dina. Kyle will feel like Theo’s putting on a show for Lola’s benefit, but Theo will argue that he belongs there just as much as Kyle does.

So we’ll see those repeated themes of Theo wanting everything Kyle has and this Dina connection as a redeeming quality.

Could Y&R take away Theo’s newfound bond with Dina? Could they knock Theo down a peg by making Kyle the only one who’s Dina’s grandson? Soaps rewrite stories like this all the time, so it’s certainly not out of the question.

At this point, Theo would be crushed by the news. He’s been getting to know Jack and the other Abbotts over the past few months, but Y&R would be pulling him out of the family.

What would happen if there was some mistake and perhaps a different Eric Vanderway was Dina’s son? After all, there’s surely more than one adopted Eric Vanderway out there.

It was a wild coincidence that Theo just so happened to be Kyle’s buddy and later found out he was his cousin. What are the odds? It all seemed too good to be true, so maybe that was indeed the case. A DNA test was done, but you can never trust DNA results on a soap.

If they can have a soapy coincidence where Theo is Kyle’s cousin out of the blue, they can undo it just as easily with other soapy coincidences. Could Jack’s perplexing discovery be something that relates to Eric’s adoption?

If something doesn’t add up, that’d be a humbling bomb to drop on Theo. He definitely couldn’t claim he belonged anymore!

There’s a possibility Theo pulled off a scam somehow, although he did have a vision of his father where he seemed truly surprised and overwhelmed. However, Y&R invented an ex-husband for Tessa Porter (Cait Fairbanks) that made zero sense considering her history and everything we knew about her. The show’s also rewriting all this Kansas stuff from Adam Newman’s (Mark Grossman) background.

If Y&R writers want to rewrite something, they’ll rewrite it. They don’t worry about what actually happened. Whatever the case, The Young and the Restless is bringing Theo-Dina drama back right as Jack’s about to discover something puzzling. It’s worth considering the idea that Theo won’t be Dina’s grandson in the end.

It’ll be interesting to see if Y&R makes some updates to Theo’s story. Do you think Dina is really Theo’s grandmother? Could a big twist change that? CDL will have other hot Young and the Restless spoilers, updates and news, so be sure to drop by regularly.