The Young and the Restless Spoilers: Mariah’s Stage Shocker – Tessa Finds Forgiveness, Couple Gets Back Together? 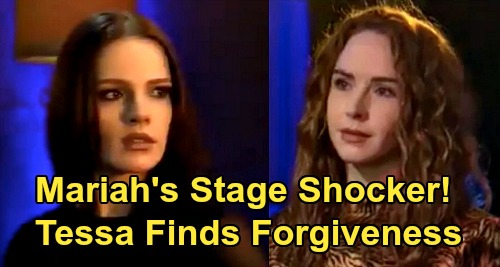 The Young and the Restless (Y&R) spoilers tease that Mariah Copeland (Camryn Grimes) will finally take all the advice she’s been given. Mariah has received guidance from Sharon Newman (Sharon Case), Kyle Abbott (Michael Mealor) and even Lindsay (Kirby Bliss Blanton). They’ve all encouraged Mariah to fix her mistake with Tessa Porter (Cait Fairbanks), but Mariah’s worried Tessa will reject her apology.

Of course, that’s no reason to sit home and let love slip away. Mariah has to at least try, so that’s exactly what she’ll do during the week of March 16-20. The Young and the Restless spoilers say it’ll take some work, but Mariah will finally track Tessa down. She’ll figure out what city Tessa’s in and interrupt her tour to make a plea for forgiveness.

Mariah will ultimately gain entrance onto Tanner Watts’ (Chase Coleman) private jet. Wyatt will convince Tanner to let her on board so she can repair the damage with Tessa.

Since Tanner must realize he’s partially responsible for this mess, he’ll do his part. Tanner will allow Mariah on the plane, which Tessa won’t be too happy about initially.

We have to remember that Tessa was kept in the dark on everything Mariah’s been dealing with. That includes Sharon’s breast cancer, Power Communications folding and Mariah’s growing insecurities about Tanner.

So imagine Tessa’s shock when Mariah suddenly made accusations about Tessa sleeping with Tanner. On Tessa’s end, it was coming out of nowhere. Mariah let her insecurities build until they exploded, which set her up for trouble.

When Tessa showed up to remind Mariah once again that she doesn’t want Tanner, she caught Mariah cheating with Lindsay. Tessa thought their relationship was stronger than this.

According to Y&R spoilers, things will make a bit more sense for Tessa once Mariah unloads her mountain of problems. Tessa really cares about Sharon and knows how much she matters to Mariah.

Sharon’s cancer diagnosis will hit Tessa hard, but she’ll also wonder how Mariah could’ve possibly thought it was OK to hide it. Plus, Tessa will be quick to point out that Mariah didn’t hide all of this from Lindsay.

Mariah will insist she didn’t want Tessa ending her tour early to support her, but shouldn’t Tessa have been the one to make that call? Tessa will also be hurt that Mariah kept her job loss a secret.

Mariah wasn’t looking forward to telling Tessa she flopped, but she should know Tessa would never judge her for that. Tessa would’ve given Mariah all the support in the world if given the opportunity.

They’ll also have to address Mariah’s persistent Tanner insecurities. Tessa’s been clear that she never loved Tanner and got Mariah’s reassurance that she understood.

Before Tessa left, she needed to know that Mariah believed everything she said. Tessa wasn’t going to accept Tanner’s offer unless she knew Mariah truly supported this tour.

At the time, Mariah got choked up and insisted that as much as Tessa wanted this, she wanted it for her. There was all that talk about them sharing one heart, so Tessa had to be devastated over how fast Mariah cheated with Lindsay. Not only did Mariah doubt Tessa’s devotion, she shattered her own with a crushing betrayal.

So, how will Tessa react when Mariah divulges these updates and begs for another chance? It would be unrealistic to have Tessa forgive Mariah for everything on the spot. Indeed, Y&R spoilers say that Tessa will tell Mariah that it’s over, and that their relationship ended the moment that Mariah decided to cheat with Lindsay.

Mariah will be devastated, but it certainly doesn’t look like she’s going to give up on her love with Tessa. Y&R spoilers say that Mariah will approach Tessa again, even appearing as she’s either on stage or about to go on stage, perhaps to make another plea for forgiveness. It certainly doesn’t look like Mariah’s going to just walk away without making every possible effort to reconcile.

The good news here is that Y&R spoilers say that Tessa will indeed forgive, which is fair since Mariah’s forgiven Tessa’s past mistakes. They’re still a great match despite their flaws – or perhaps even because of them! Mariah and Tessa have always had a special connection, so they’ll get back on track soon enough.