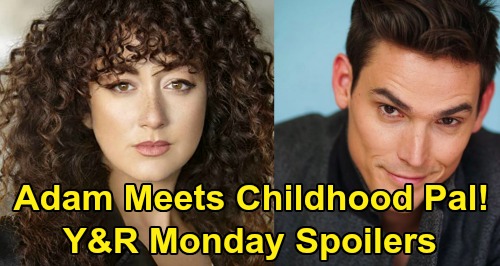 The Young and the Restless (Y&R) spoilers for Monday, March 16, tease that a shocker’s coming up for Chelsea Lawson (Melissa Claire Egan) and Adam Newman (Mark Grossman). Their trip to Kansas will lead to an unexpected discovery – one that ties in with Adam’s past.

Adam will be taken aback when he runs into somebody he knew when he was a kid. He’ll happily greet his old childhood pal, Alyssa Montalvo (Maria DiDomenico), who’s apparently still living in the same town.

Alyssa will undoubtedly meet Chelsea along with Connor Newman (Judah Mackey). She’ll enjoy the opportunity to catch up on Adam’s life and share what she’s been up to all these years as well.

Of course, Y&R must have a grander plan in mind than a chance encounter and a simple conversation. Will Alyssa jog Adam’s memory about something during their chat? Will she share a new detail for Adam to mull over instead?

The Young and the Restless spoilers say Victor Newman (Eric Braeden) is keeping a secret, so this Alyssa popup could lead to Adam’s upcoming questions about the past.

In the meantime, Rey Rosales (Jordi Vilasuso) will do a favor for Nick Newman (Joshua Morrow). While Nick’s away on business in Chicago, Rey will pitch in with Faith Newman (Alyvia Alyn Lind). Nick has tried to be Faith’s rock during Sharon Newman’s (Sharon Case) crisis, but Rey may have to tackle that challenge for a bit.

The Young and the Restless spoilers say Rey will get updates on a secret this Monday. Will it be something he pries out of Faith? Whatever the case, Rey’s a great guy and a valuable member of “Team Sharon.” Sharon and Faith are certainly lucky to have his support.

Next, Tessa Porter (Cait Fairbanks) will get an unwelcome visit. She won’t be pleased when Mariah Copeland (Camryn Grimes) figures out her latest tour stop and shows up outside Tanner Watts’ (Chase Coleman) jet. Mariah will insist on speaking with Tessa, so Tanner will let her on to make her apologies.

Honestly, it’s nice to see Mariah taking action. In the past, Mariah’s always been a total mess anytime she even thought Tessa might leave. It’s strange that Y&R writers have made Mariah almost lackadaisical now. It’s like Mariah’s already given up, which just doesn’t fit with “Teriah” history. Go fight for your girl, Copeland!

Luckily, Mariah is finally making an effort. Once she’s sitting next to Tessa, Mariah will spill what a train wreck her life has become. Tessa will hear about Sharon’s cancer and get the news that Power Communications folded. She’ll learn what led to Mariah spinning out and accusing Tessa of cheating before cheating herself.

Y&R spoilers state that Mariah will plead for forgiveness, but Tessa will have a lot to process. We’ll see what Tessa says as she struggles over all the secret spillage and Mariah’s decision to sleep with Lindsay (Kirby Bliss Blanton). Tessa will indeed get past Mariah’s betrayal eventually, but emotional wounds will still need time to heal.

It sounds like some fantastic scenes are coming up on the CBS soap. As other updates and news become available, be sure to stop by CDL often for more Young and the Restless spoilers.