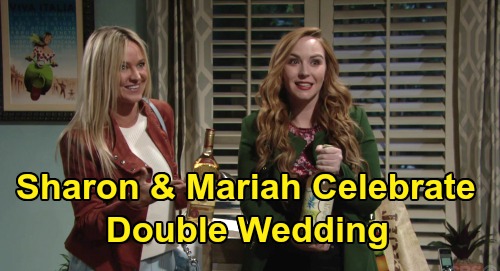 The Young and the Restless (Y&R) spoilers tease that Sharon Newman (Sharon Case) will continue her brave fight against breast cancer. Rey Rosales (Jordi Vilasuso) has made it clear that he’s not going anywhere. In fact, Rey’s admitted he doesn’t know what he’d do without Sharon. He’ll make sure Sharon’s got the support she needs to survive and come out stronger on the other side.

Since this story is all about showing a realistic battle and providing hope, Sharon’s obviously going to beat her cancer. That’ll give Sharon a new beginning down the road. Sharon will once again be able to look to the future. Will Rey pop the question and plan a wedding with Sharon to celebrate?

This storyline was originally set to wrap up around October, which is breast cancer awareness month. Naturally, plans can change if a story starts to drag and needs to be moved along. It’s possible the writers have already shifted gears since things indeed seem to be moving quickly now.

However, there’s also Y&R’s production shutdown to consider. The COVID-19 aka coronavirus crisis has to fade out before The Young and the Restless can get back in action.

No one can be certain of when the cast and crew will return work, so things are a bit up in the air. Even when the actors do resume filming, there may be some lingering restrictions involving kissing or close contact.

With that in mind, we definitely want Y&R to wait until the right time for any wedding celebrations. Nevertheless, things will inevitably get back to normal at some point, so we have to wonder if some “Shey” nuptials will happen.

It would make sense for Sharon and Rey to marry after going through such a difficult experience together. It’s already brought them much closer.

Of course, there’s another couple that’s already offered up some engagement hints. In a recent episode, Tessa Porter (Cait Fairbanks) nearly delivered a casual marriage proposal, but Mariah Copeland (Camryn Grimes) stopped her with a kiss.

Although Mariah’s not quite ready to have that discussion, she assured Tessa that she would be once Sharon was feeling better and they were feeling grounded. Mariah and Tessa seem poised to get engaged once Sharon’s cancer storyline concludes.

Considering Sharon and Rey may have the same idea, could Y&R have a double wedding celebration?

Now don’t get us wrong! Tessa and Mariah absolutely deserve their own wedding ceremony. They’ve earned it since they’ve overcome so many struggles and are truly in it for the long haul. When a show’s been building a pairing for over three years, they shouldn’t have to share the spotlight when it’s time for their nuptials.

That said, Chelsea Lawson (Melissa Claire Egan) and Adam Newman (Mark Grossman) still need to get hitched. Mariah and Tessa will likely tie the knot. When you throw in Sharon and Rey potentially wanting to marry, that’s…well, a lot of weddings.

It’s easy to imagine Y&R having “Shey” piggyback on the “Teriah” ceremony that’s probably coming. It really does seem like something Sharon and Mariah would talk about doing.

Mariah’s not the type to want some massive event, and neither is Tessa. As for Sharon, it’s not her first wedding rodeo! Sharon’s had enough weddings for a lifetime, so she wouldn’t want a fuss either. Mariah and Sharon could pitch this mutual low-key gathering to Tessa and Rey.

Even before that, the timing of the engagement announcements would bring some pretty cute moments. Can’t you just envision Sharon and Mariah excitedly telling each other they have big news and playfully arguing about who should go first? Blurting out “I’m getting married!” at the same time would be adorable.

Regardless, the end of Sharon’s cancer battle should be a huge relief for “Team Sharon.” Perhaps a double wedding celebration would be a nice way to cap off this dramatic storyline. Most of us will want something happy and fun! As other Y&R details come in, we’ll pass along any updates.