The Young and the Restless Spoilers: Theo’s Dirty Kyle & Summer Sabotage – Refuses to Let ‘Skyle’ Live Happily Ever After? 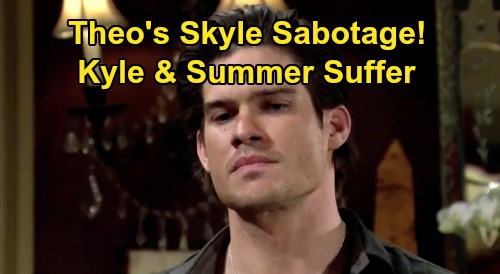 The Young and the Restless (Y&R) spoilers tease that Theo Vanderway’s (Tyler Johnson) plans may be falling apart. Summer Newman (Hunter King) once pointed out that Theo wanted Kyle Abbott’s (Michael Mealor) whole life. That certainly seems to be true based on Theo’s behavior since he first showed up in town.

First, Theo tormented Kyle about their New York secret. We can’t forget that Theo got together with Summer Newman (Hunter King) initially as well. They kept it casual, but the point is Theo was all too eager to dip into Kyle’s reject pile. Perhaps Theo even suspected that Kyle wasn’t over Summer and thought it would get under his skin.

Theo eventually moved on and focused on winning over Lola. Even though Kyle’s back with Summer, Theo clearly enjoys rubbing Kyle the wrong way with this Lola romance.

It was quite a stroke of luck when Theo was revealed as Kyle’s cousin and Dina Mergeron’s (Marla Adams) grandson. That gave Theo another angle to work with and led to Theo plotting to take over Kyle’s job.

Of course, no one’s saying Kyle’s innocent in all this. Kyle’s made some uncalled for moves and provoked Theo on more than one occasion. However, it’s tough to deny that Theo’s obsessed with Kyle on some level. Even Theo himself has admitted to resenting Kyle, which has probably fueled this whole fixation from day one.

So what happens as Theo’s scheme crumbles? Theo appears to be on the verge of losing his position at Jabot. Jack Abbott (Peter Bergman) definitely isn’t happy with Theo or even Kyle for that matter. All the fighting has driven Jack to his breaking point.

In other words, Theo’s losing some of the family progress he’s made. Bonding with Jack was important to Theo – perhaps because Jack is Kyle’s father. It was another way to help Theo capture this dream life he wanted.

Now we should also consider Lola, who decided to postpone her New York getaway with Theo. That’s a setback and more are probably coming. Lola claimed it was because she wanted to stick around in case Rey Rosales (Jordi Vilasuso) needed her, but maybe she was just looking for an excuse. It’s safe to say Rey would’ve been fine for a weekend.

Regardless, The Young and the Restless may have another round of drama in store for Theo and Lola. What will Theo do if he can’t truly win Lola’s heart? Theo could hit rock bottom at that point. His obsession could get worse than ever and leave Theo determined to make Kyle suffer.

If Theo can’t be happy with Lola, why should Kyle be happy with Summer? At least that may be how Theo sees it! Perhaps Theo will plot some “Skyle” sabotage once he’s got nothing left to lose.

The Young and the Restless spoilers say Theo still has a few tricks up his sleeve, so we’ll see how it all plays out. As other Y&R news emerges, we’ll offer the latest updates.

Do you think Theo will resort to sabotage? Will Theo try to blow up Kyle and Summer’s relationship? Y&R fans won’t want to miss all the action! Don’t forget to drop by CDL again soon for great Young and the Restless spoilers, updates and news.