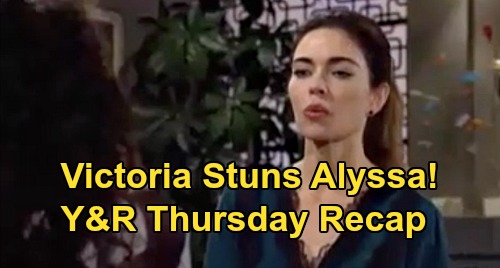 The Young and the Restless (Y&R) spoilers recap for Thursday, April 9, teases that Sharon Newman (Sharon Case) will await some important updates from her doctor. Nick Newman (Joshua Morrow) will arrive at Crimson Lights and get brought up to speed by Rey Rosales (Jordi Vilasuso). Sharon will admit all the waiting is driving her crazy, so she’ll decide to call her doctor and push for news.

Once Sharon concludes her phone call, she’ll tell Rey that she has to have a lumpectomy and a biopsy to determine if the cancer has spread. It won’t be long until Faith Newman (Alyvia Alyn Lind), Mariah Copeland (Camryn Grimes) and Tessa Porter (Cait Fairbanks) show up. Sharon will get a group hug with the girls before they all settle on the duties they’ll cover over the next couple weeks.

Rey will be battling concerns about Sharon, so he’ll open up to Nick on the patio. While Nick offers Rey a pep talk, Tessa will do the same for Mariah inside. As Mariah frets outcome of all this for Sharon, Tessa will insist there’s one thing Mariah can count on: Tessa will always be there, and she’ll always be Mariah’s.

Before Tessa can finish her thought, Mariah will plant a kiss. She’ll promise that when they’re on the other side of all this and feeling grounded, she’ll want to hear all about it. Tessa will insist she’s going to sweep Mariah off her feet, but Mariah will contend that Tessa already has.

Back with Rey, he’ll let Sharon know that he intends to take a little time off work. Sharon will lock lips with Rey while Abby Newman (Melissa Ordway) deals with drama at the Grand Phoenix. A code enforcement officer will insist he’s shutting down Abby’s construction over missing work permits.

Nearby, Phyllis Summers (Michelle Stafford) will sport a look of satisfaction as she drinks her martini. Abby will march up to her rival and argue that she’s building this hotel whether Phyllis likes it or not. Phyllis will talk about all the delays that could come from another failed inspection.

After Nick shows up, Abby will get the picture when it comes to their reconnection. Nick won’t think he has to justify the decisions he makes, but Abby will bring up Phyllis’ sabotage. Once Abby complains, she’ll wish Nick luck and stomp off. When Phyllis joins Nick in the elevator, they’ll enjoy a make-out session.

Other Young and the Restless spoilers say Alyssa Montalvo (Maria DiDomenico) will show up to see Adam Newman (Mark Grossman). At the penthouse, Chelsea Lawson (Melissa Claire Egan) will inform Alyssa that Adam isn’t there at the moment. Alyssa will gripe about her expose not being published yet and wonder why Adam’s letting his father get away with murder.

Chelsea will offer up excuses and argue that they’re acting out of an “abundance of caution.” When Chelsea hints at paying her, Alyssa will suggest that’d be a bribe. Chelsea will downplay the suggestion as Adam gloats to Victoria Newman (Amelia Heinle) about being the new boss at Newman Enterprises. At Society, Adam will push Victoria’s buttons about wishing she’s stay on as an employee.

Victoria will hint that Newman’s a sinking ship with Adam in charge and won’t want to be around to watch it happen. As things get heated, Adam will insist that he’s going to wipe out all Victoria’s work at Newman. Y&R spoilers say Adam will add that he’s always been Victor Newman’s (Eric Braeden) heir apparent.

After Victoria takes a call, she’ll head over to Chancellor Media to confront Billy Abbott (Jason Thompson). Victoria will grumble about Billy calling the nanny when he had to cancel on spending time with the kids. Billy will counter that he thought Victoria would be busy at work, but she’ll admit that she’s out and Adam’s in.

Billy will rant about Victor and insist it’s time for him to suffer the consequences of his actions. Victoria will fire back that she makes the calls here, not Billy. The Young and the Restless spoilers say Victoria will vow to achieve victory in this battle on her own. Back with Adam, he’ll take great pleasure in removing Victor’s portrait and getting comfortable in the CEO chair.

Later, Adam will find an agitated Alyssa with Chelsea at the penthouse. Alyssa will lash out at Adam over the delay on the article publication. However, Adam will insist that Alyssa’s work should be in a major national magazine. After Adam fibs about his connections, Alyssa will be appeased enough to exit.

Once they’re alone, Chelsea will tell Adam that Alyssa is never going to let it go. Adam will reflect on Alyssa becoming a liability, but he’ll feel confident they’re going to remain on top. They’ll toast since Adam feels unstoppable, but he’ll soon get a text about meeting Victor at Newman Enterprises.

At the Grand Phoenix, Victoria will get Alyssa’s attention and bring up the people they have in common. Alyssa will wonder if she knows some friends of Victoria’s, but Victoria will insist Alyssa should make no mistake: they’re not Alyssa’s friends.

It sounds like another action-packed Y&R episode’s in store. CDL will have other sizzling Young and the Restless spoilers, updates and news to pass along, so be sure to pop in regularly.