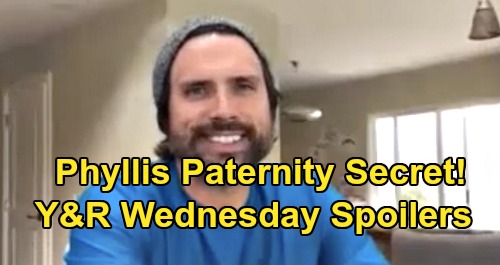 The Young and the Restless (Y&R) spoilers recap for Tuesday, April 28, reveals that some shockers and conflict played out in Genoa City. Y&R’s “Katherine the Great” week continued with another exciting episode – this one from July 2004. Here’s what went down in GC and how it affected some classic characters.

Phyllis ranted about Christine being the reason she was kept away from Daniel and couldn’t raise him. She explained that she got pregnant by a man who didn’t want kids when she was quite young. Daniel assumed Phyllis must’ve seduced Danny and lied about having his baby. Phyllis insisted that she knew Danny would be a wonderful father.

Daniel was upset about his life being manipulated. Although Phyllis pushed for a relationship with him, Daniel wanted time to mull over this paternity news. Across town, Christine and Danny didn’t believe Phyllis would content with a single visit. However, Chris had faith in Daniel’s judgement. Danny wanted Christine to live with him as well as Daniel, and Chris gave her approval.

A little later, Phyllis showed up to speak with Christine alone. At the GCAC, Danny saw Daniel and called him “son.” Daniel was irked and warned that Danny should never call him that again. Meanwhile, Katherine Chancellor (Jeanne Cooper) wasn’t on board with getting sober. Katherine turned her intervention into a party, but her loved ones still tried to help her see the light.

Brock Reynolds (Beau Kazer), Jill Abbott (Jess Walton), Arthur Hendricks (David Hedison), Lauren Fenmore (Tracey E. Bregman) and Mackenzie “Mac” Browning (Ashley Bashioum) all tried their luck at getting through to Katherine. She was an alcoholic who had lost control and no longer seemed like herself. Katherine was encouraged to reject this path and stop destroying her life.

John felt like Victor’s stipulation made this extortion and didn’t want to tell Jack Abbott (Peter Bergman) he wasn’t wanted there anymore. Once Jack appeared and realized they were seriously considering the offer, he was offended. John tried to settle Jack down, but Jack ultimately decided to just quit.

Afterward, John tried to undo the damage and insisted he would turn down the money. Nevertheless, Jack thought it’d be dumb to let Jabot go broke over this. John was glum since he wanted Jack to carry on the family business someday. Once Jack hugged his father and headed for the exit, he vowed to make a comeback.

Next in our Young and the Restless spoilers recap, Drucilla Winters (Victoria Rowell) found Devon Hamilton (Bryton James) at the rec center. Devon assumed Dru wanted to rip into him again. Drucilla argued that she just didn’t want Devon leading Lily Winters (Christel Khalil) astray. The money Devon stole came up along with Lily’s decision to lie to the cops.

Devon protested that Lily made that decision on her own. It wasn’t something Devon asked of her. Furthermore, Devon was outraged that stuck-up Dru was coming around to judge him. He didn’t think Dru had any right since she grew up on the streets. Drucilla felt like she’d worked hard to rise above her circumstances. she warned Devon to steer clear of Lily or else she’d call his social worked.

Lily visited Devon next, but she was turned away. Devon insisted Lily should find another charity case, which left Lily looking shocked. Lily got a clearer picture when a worker offered updates on Dru’s latest trip there.