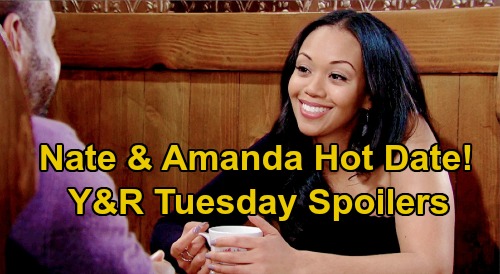 The Young and the Restless (Y&R) spoilers for Tuesday, April 7, tease that Lola Rosales (Sasha Calle) will find herself in the middle of a family war. Y&R fans know Lola wants to take things slow with Theo Vanderway (Tyler Johnson), so he’s assured her that he respects her decision. Of course, Theo still intends to move things along when he can – and that may come into play a bit on Tuesday.

Theo will apparently invite Lola to join him at the Abbott mansion for a visit with Dina Mergeron (Marla Adams). When Kyle Abbott (Michael Mealor) shows up and takes in the scene, it won’t take long for his anger to boil over. It’s easy to understand both sides of this battle. On one hand, Theo really does look like he’s putting on a show for Lola’s sake.

Seriously, why bring Lola into this? Does Theo really think Lola wants to be on the Abbott property when she’s going through a divorce from Kyle? Theo’s showboating and he knows it! It’s obvious Theo’s hoping Lola will appreciate his softer side with Dina.

On the other hand, it’s none of Kyle’s business where Lola wants to be – even if it’s at the Abbott family home with Theo. After the way things went down, Kyle needs to back off and let Lola do whatever she wants.

The Young and the Restless spoilers say Lola will be upset and flustered as the cousins start sparring again. Theo and Kyle will confuse poor Dina into thinking Stuart Brooks and John Abbott are clashing over her.

They’ll make this about them when Dina’s home trying to leave whatever time she has left in peace – and Jack Abbott (Peter Bergman) will NOT be OK with that.

After Jack makes it clear that enough is enough, he’ll insist Kyle and Theo are going to pay for their behavior. They’ll have to sweat it out as they prepare for Jack’s upcoming board meeting, which will decide their fates. Y&R fans can expect some tense moments as they wonder what Jack’s got in mind.

Over with Jill Abbott (Jess Walton), she’ll extend a peace offering. Now that Colin Atkinson (Tristan Rogers) has been captured and his dirty tricks are over, it might be a good time to reach out to Amanda Sinclair (Mishael Morgan).

Amanda’s reputation was damaged through her association with Colin, but she was innocent in his mind games. Jill initially got duped, so she may be sorry she didn’t see through Colin’s scheme from the start.

If anyone should know how Colin operates by now, it’s Jill. Whatever the case, Amanda doesn’t blame Jill or anyone else who was caught up in the drama. Amanda doesn’t even seem focused on Colin now; she’s all about looking to a future – a future that may include Nate Hastings (Sean Dominic).

The Young and the Restless spoilers say Nate will be thoroughly impressed when he picks Amanda up for their date. Amanda will think Nate looks dressed to impress as well. She’ll let Nate wine and dine her as they get to know each other a little better.

Nate will probably be flat-out smitten before the night’s even over. He already liked Amanda, but it won’t take Nate long to fall hard now that she’s truly interested. Will love bloom quickly for Amanda and Nate?

We’ll give you updates as other news emerges on this love story. The Young and the Restless fans know things can get complicated in Genoa City, so we’ll see how it all turns out!

Are you hoping Nate and Amanda have a bright future together? Do you think they make a good couple? CDL will have other hot Young and the Restless spoilers, updates and news to pass along, so be sure to stop by often.