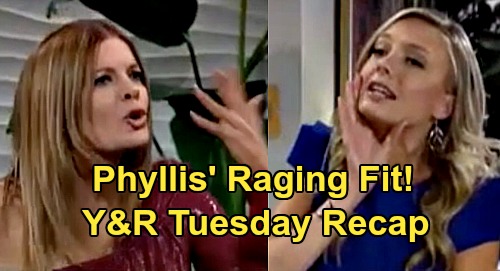 The Young and the Restless (Y&R) spoilers recap for Tuesday, April 7, teases that Adam Newman (Mark Grossman) and Chelsea Lawson (Melissa Claire Egan) will mull over Victor Newman’s (Eric Braeden) surrender. They’ll be surprised that Victor just caved like that, but Adam will suspect his siblings will put up more of a fight.

Although Adam will be able to understand Victor’s motives, he won’t have any regrets. Adam will think Victor would’ve done the exact same thing if he’d had this much dirt on his opponent.

At Newman Enterprises, Victoria Newman (Amelia Heinle) will argue that Victor should call Adam back and undo this. Victoria will want Adam exposed as a fraud and won’t understand why Victor’s letting him win.

Y&R spoilers say Victor will argue that he’s playing the long game. He’ll add that he has a plan, but Victoria will feel like this is a huge betrayal.

Victor will talk about loyalty, but Victoria will think he’s confusing that with something else – and maybe she is, too. Later, Victoria will give Nikki Newman (Melody Thomas Scott) updates on her first day back at the office, which was also her last day. After Nikki hears the blackmail news, she’ll wonder if Victor might really be guilty.

Victoria will gripe about Victor letting Adam divide the family and will refuse to spend another night in that house. Nikki will ultimately convince Victoria to stay at the tack house, but she won’t want Victor getting the wrong idea. Victoria will insist she’s not letting this slide and won’t let people hurt her anymore.

After Victor returns home, Nikki will ask what Victor isn’t telling her. She’ll question Victor’s strategy, but he’ll want to handle things himself. Victor will point out that he had nothing to do with the death of AJ Montalvo.

Now that the war is on, Victor will worry it’s going to get ugly. Nikki will be concerned, but Victor will vow to do what he’s always done: protect his family no matter the cost. Back at Newman Enterprises, Victoria will somberly pack up her belongings and gaze at Victor’s portrait one last time.

After a quick chat with Chance Chancellor (Donny Boaz), Abby Newman (Melissa Ordway) will head over to the Grand Phoenix. A frustrated Phyllis Summers (Michelle Stafford) will be dealing with the aftermath of loud construction across the street.

Since it’s driving guests away, Abby will be happy to gloat and offer a reminder about construction starting up again at 5:00 a.m. It turns out Abby even told the construction crew they could use the Grand Phoenix’s restrooms, so Phyllis will really be fuming.

Once Abby’s gone, Phyllis will make a phone call and ask for some help. At the Chancellor mansion, Jill Abbott (Jess Walton) will catch up with Chance. They’ll talk about Colin Atkinson’s (Tristan Rogers) arrest and the fact that he cleared Jill’s name.

Talk will turn to Abby and Chance’s relationship before Jill’s love life comes up. Jill will contend that she’s satisfied with the way things are. Once Chance reconvenes with Abby, he’ll confess that Jill seems torn about Colin landing behind bars.

Abby will admit she used to have her own weakness for bad boys, but she’ll feel like Chance has given her the best of both worlds.

Next, Theo Vanderway (Tyler Johnson) will praise Dina Mergeron (Marla Adams) at the Abbott mansion. As Theo talks about how Dina knew what she was born to do and wouldn’t let anything hold her back, he’ll insist he admires her.

After Lola Rosales (Sasha Calle) shows up, she’ll apologize for being late and will reveal that she brought flan. Dina has a real sweet tooth, and this happens to be her favorite dessert. Lola will join Theo in trying to have a conversation with Dina, but Dina will remain unresponsive.

However, Dina will have a flash of recognition when she hears about the Pierre Hotel in New York. Theo will feed Dina a little flan before Kyle appears and eavesdrops.

Moments later, Kyle will confront Theo about overwhelming Dina with too many visitors. They’ll get into a shouting match as Kyle insists Theo just wanted to score points with Lola.

Theo will feel like he belongs there just as much as Kyle does, so their confrontation will escalate until Dina lashes out. She’ll confuse Theo and Kyle for Stuart Brooks and John Abbott just before Jack rushes in.

The Young and the Restless spoilers say Jack will want to speak with the feuding cousins alone. Since Jack’s fed up with Kyle and Theo’s constant fighting, he’ll kick them out of the house.