The Young and the Restless Spoilers: Victoria & Adam’s Shocking Alliance – Band Together for War On Nick & Victor? 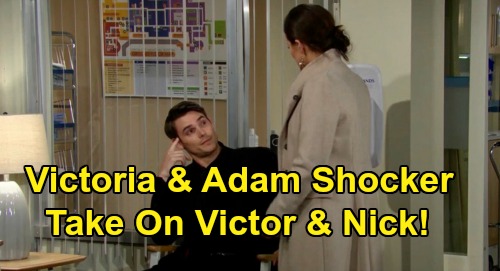 The Young and the Restless (Y&R) spoilers tease that Victoria Newman (Amelia Heinle) will awaken from her coma later this week. She’ll immediately be looking for answers about her condition and looming recovery. Victoria will have her kids on her mind, but she’ll also worry about what the future holds for Newman Enterprises.

Y&R fans know Victoria finally got her dream job and her father’s approval. Victor accepted that Victoria had earned the throne, but her recovery will force someone else on it. Despite Adam Newman’s (Mark Grossman) interest in the CEO position, it appears Victor will ultimately hand the reins to Nick Newman (Joshua Morrow).

Although Victor and Adam have made great strides in their relationship, Nick is still the more trustworthy son. The Young and the Restless spoilers, updates and news say Victor will urge Nick to rise to the challenge. There’s a good chance Nick will exceed his father’s expectations.

Nick’s in Phyllis Summers’ (Michelle Stafford) orbit more and more these days. She’s one of the most cutthroat characters when it comes to business, so she may rub off on Nick a bit. What happens once Victoria’s well enough to return?

There’s also the matter of Victor’s deception, which should come out eventually. Victor lied about Billy Abbott (Jason Thompson) having an affair with Amanda Sinclair (Mishael Morgan). That’s not something Victoria will be pleased about once the truth’s exposed.

Y&R has potentially laid the groundwork for a different kind of Newman war. Nick and Adam are used to brother battles by now, but how will their sister fit into the next one?

Perhaps a snubbed Victoria will team up with Adam at Dark Horse. Adam’s been feeling disconnected from his family – and soon, Victoria may be in that same boat. She may be willing to put her issues with Adam aside and join forces with him.

Will Victor refuse to give the CEO spot back to Victoria? Could that set up a major feud and lead Victoria to fight against her father? Victoria’s the kind of gal who would want to prove Victor wrong. She might hope to crush the competition and leave Victor wishing he’d let her take the reins back after all!