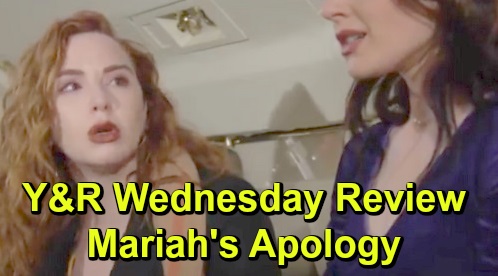 The Young and the Restless spoilers review for Wednesday, March 18, tease that Adam Newman (Mark Grossman) and Chelsea Lawson (Melissa Claire Egan) will chat at the penthouse about their Kansas trip. They’ll discuss Adam’s childhood friend Alyssa Montalvo (Maria DiDominico), and Adam will note that it’s strange that he and his mom didn’t go to Alyssa’s dad’s funeral and that Victor Newman (Eric Braeden) was in town at the time.

Chelsea will think that the timing of it all is interesting, and she’ll wonder if Victor could have had something to do with Alyssa’s dad’s death. Chelsea will say that it just feels like there’s more to the story. Adam will say that his memories of the time are fuzzy, and that he’s going to go do a little reconnaissance mission in enemy territory just for grins.

Adam will head to the Newman ranch where he’ll interrupt Victor, Nikki Newman (Melody Thomas Scott), and Nick Newman (Joshua Morrow) discussing Newman Enterprises business. Nikki will bristle and warn Adam not to cause conflict. But Adam will say that he’s there on another more troubling matter. Nick will balk, and Adam will proceed to say that he was just at the farm in Kansas and that it’s in bad shape.

Victor will wonder about the caretaker, and Adam will say that he’s having trouble keeping the place up, plus the furnace just broke in the house. Victor will say that he’ll make sure the farm is taken care of properly. Adam will then turn to Nick and say that the word on the street is that he’s going a fine job as CEO of Newman Enterprises. Nick will assume that Adam is trying to pull something.

On his way out, Adam will say that he ran into Alyssa, an old family friend, in Kansas. Adam will ask if Victor ever met her or her family on one of his visits, but Victor will say that the name Montalvo doesn’t ring a bell. Adam will go, and everyone will assume that he’s got some agenda. Nick will leave a bit later, and Victor will tell Nikki that Adam’s up to something.

Adam will return to the penthouse, where he’ll tell Chelsea that he visited the ranch and let it slip about Alyssa. He’ll say that he noticed a flicker in Victor’s eyes – one he knows all too well – and that Victor is holding something back. Adam won’t know what it is, but he’ll vow to find out.

Of course, Adam and Chelsea are suspecting the worst of Victor in this situation, theorizing that perhaps Victor was responsible for Alyssa’s dad’s death, or that he was possibly involved in his sketchy business dealings. But it’s always possible that there’s a worse outcome here – like that Adam’s mother was involved in the death of Alyssa’s dad. That’s something that Adam may not like learning if he takes this thing too far.

Meanwhile, on the new episode of Y&R on Wednesday, March 18, Summer Newman (Hunter King) will arrange a meeting between herself, Kyle Abbott (Michael Mealor), Phyllis Summers (Michelle Stafford), and Nick. They’ll all gather at the Grand Phoenix, and things will immediately be awkward between Phyllis and Nick, given that they’re now sleeping together and clearly won’t want Summer to know.

Nick will immediately say that Summer and Kyle better not have a big announcement to make, and Phyllis will point out that there’s no ring on Summer’s finger. Nick and Phyllis will needle Kyle a bit about his history, and he and Summer will explain that this time it’s for keeps. Nick will opine that maybe they’re just not right for each other, and Phyllis will stare him down incredulously.

Phyllis will then spout that it would be sad if people couldn’t get a second chance at love, and that Nick shouldn’t judge people with high moral standards that he can’t even meet himself. They’ll continue to bicker as Summer tries to steer the conversation in a positive direction. Soon, Phyllis and Nick will be seriously arguing, then they’ll both walk away, frustrated.

Finally, at a concert venue, Tessa Porter (Cait Fairbanks) will have some trouble tuning her guitar. Tanner Watts (Chase Coleman) will ask if she’s ok, and she’ll say she’ll be fine. Tanner will check his messages and say to himself that she might be right about that. Later, Tessa will finish up her set for the crowd when Tanner appears on stage and says there’s a special guest there tonight.

He’ll then start playing the song that Tessa wrote for Mariah Copeland (Camryn Grimes) and suddenly Mariah will appear on stage with a microphone. Tanner will scoot off, and Mariah will start talking. Mariah will say that she can’t believe she’s doing this in front of all these people, but that this is coming from her heart. She’ll tell Tessa that she utterly and absolutely loves her, and that she’s sorry she hurt her.

Mariah will apologize for her behavior and promise that if Tessa takes her back, she’ll never betray her again. The crowd will cheer, and Mariah will say that she’ll do whatever it takes – and that Tessa should tell her what to do and she’ll do it. Tessa will look confused, then walk off stage. Mariah will be horrified.

Wednesday’s Y&R episode sounds great, so make sure you stay tuned! Remember that CDL is your trusted source for the latest Young and the Restless news and spoilers. We’ll keep you updated with great recaps, reviews, and new information as it arises.