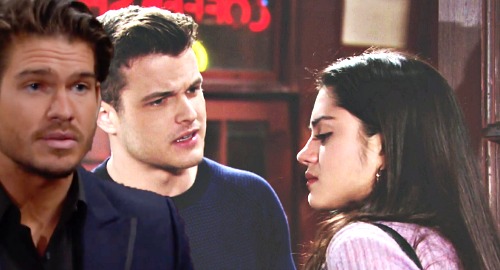 Kyle’s ending his marriage to Lola Abbott (Sasha Calle) and has finally accepted that he wants Summer. He feels like their reunion was inevitable.

However, King has scored a potential big break in primetime. Hunter King snagged the lead role in a new ABC comedy pilot called “Prospect.” If it’s picked up, it could lead to King’s exit from Y&R and perhaps Summer’s departure as well.

The Young and the Restless may not be keen on recasting since King could always make a comeback at some point.

Even so, King might be busy with this primetime gig for a while if it all pans out. On Twitter, King tweeted out some updates and expressed excitement over the project.

“Someone pinch me because this doesn’t feel real!” King said. “I feel like the absolute luckiest girl in the world to be a part of this pilot! Thank you to everyone involved in helping make this happen! #dreamcometrue”

If Summer ends up leaving, that could obviously affect Kyle’s romantic future. The Young and the Restless can’t just have hottie Kyle stay single, so this could shift to a Kyle, Lola and Theo Vanderway (Tyler Johnson) love triangle instead of a quad.

Could Kyle have a change of heart about his relationship with Lola? Could he decide Lola’s the one he’s meant to be with after all?

Of course, Lola would inevitably be wary of letting Kyle have her heart again. She’d have some serious walls up and might choose Theo for a while. Still, Kyle and Lola shared a special connection. It might be something they could rekindle if the writers play this right and Summer’s exit forces it.

Plenty of “Kola” fans would be happy about a reunion. Although Kyle’s been – well, a “dirtbag” as Rey Rosales (Jordi Vilasuso) so eloquently put it – you’d be hard-pressed to find a guy who hasn’t been at one time or another on Y&R.

Kyle and Lola supporters could probably forgive a lot if it meant getting their favorite couple back.

The Young and the Restless spoilers say things seem a bit uncertain due to King’s pilot news, so we’ll keep you posted on any updates along the way. Would you like to see Kyle and Lola reunite? Do you think Lola should take Kyle back after how she’s been treated?