The Young and the Restless Spoilers: Will Y&R Filming Begin This Week? – Exclusive News Update 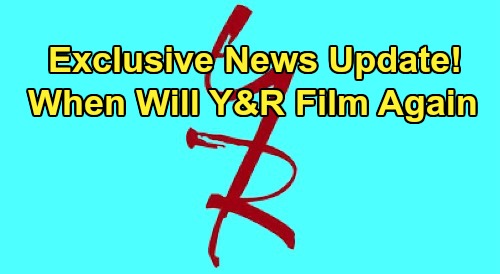 The Young and the Restless spoilers tease that the word from Los Angeles County, which is where Y&R films, has seemed pretty positive lately. On Friday, June 12th, the county gave the green light for film and TV production to start, but obviously that won’t mean that everyone will show up for work as usual starting today and filming will begin like in the past.

The new reality for Y&R and the other soaps is that there will be a whole new constellation of safety regulations and red tape that the show will have to deal with before filming can begin. In fact, when you consider the magnitude of the task of testing all of the cast and crew for COVID-19, that’s going to take a considerable amount of time.

And suppose that someone on the cast or crew does test positive for COVID-19? That person will need to be replaced, which will take time, and if that person is an actor who was supposed to be featured during filming, then re-writes and more delays would necessarily have to happen.

In other words, it will take time if the process runs smoothly, but then if there are some snags, that will tack on extra time to the process.

Of course, it will also take time to implement all the safety measures that will have to be in place and running smoothly before filming can start – the this includes set sterilization and sanitation, hand washing stations, safety checks, and the like.

There’s also the issue of securing work permits for filming and meeting all of the regulations that will be required for filming to begin. That seems like it would have to be done first, and as CDL reported last week, the office that issues filming permits in LA was planning on opening today, Monday, June 15th.

But how long will the permit application and issuance process take? That seems up in the air at this point, and it could take some time. In addition, CDL reported that practices such as social distancing will have to be in place during filming as well, which means no up-close-and-personal scenes between the actors. That will take some creative camera work, and that could take time to figure out.

The whole process will be new for everyone involved in front of and behind the camera, and it just doesn’t seem realistic to think that everything will just come together seamlessly from the get-go. There will be a learning process, and again, this will take some time to get it all right.

So, when can Y&R fans expect to see their show back to filming? It’s pretty difficult to think that filming will begin this week, considering all the hoops that will have to be jumped through and the safety precautions we’ve talked about so far. And that’s not even considering things like union sign-offs, waivers, and insurer sign-offs on the whole process. There should be a lot of regulation in place here.

The bottom line is that we must keep in mind that there are a lot of components to a TV show being in production, and each needs to be running smoothly for the show to go on, so to speak.

This isn’t to say that it’s impossible for Y&R to get back up and running soon, but it seems that the idea that it could be fully operational this week is probably not realistic.

We’ll see what happens here, and we definitely want Y&R to get up and running as soon as possible. It’s just a matter of how long it takes for everything to come together while dealing with the realities of the COVID-19 threat and keeping everyone safe.

We’ll remain cautiously optimistic, but we don’t expect the show to be filming right away. Stick with the CBS soap and remember to check CDL often for the latest Young and the Restless spoilers, updates, and news.