The Young and the Restless Spoilers: Which Storylines Will End When New Y&R Episodes Return? 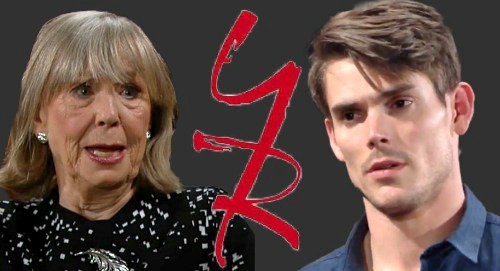 The Young and the Restless spoilers document that there are many paused storylines that fans are waiting to see. Among them include tales that are leading to natural conclusions, while others arguably should be written out so many characters can move in different directions.

Adam Newman (Mark Grossman) needs to come to terms with what happened in Kansas when he was a child and face some form of consequences for what took place in Las Vegas, Nevada.

Jack Abbott (Peter Bergman), Ashley Abbott (Eileen Davidson), and Traci Abbott (Beth Maitland) must all continue to value whatever amount of time their mother has left, while also putting what happened to their family into a deeper perspective.

Chloe Mitchell (Elizabeth Hendrickson) needs to have her baby, or Chloe’s new child needs to be presented to the audience, with the birth having taken place during the paused period where no new episodes were shown.

Young And The Restless Spoilers – Adam Newman Confronts The Past

Someone’s past can broadly be considered a second ago, an undetermined period that has passed, or an amount of time in which one has lived. In Adam’s instance, he was forced to confront a moment where he acted in defense of his mother when he was a child. His choice to defend her life resulted in the end of AJ Montalvo’s (no actor’s name known for this role).

There was a more recent period, that wasn’t exactly defined for the audience, but came between when Adam (as then played by Justin Hartley and eventually played by Grossman) defended Chance Chancellor’s (Donny Boaz) life.

Adam’s decision to involve himself in a tense situation resulted in his need to act in self-defense, which ended the life of a man who was lunging at him.

Victor Newman’s (Eric Braeden) protection of his then young son resulted in no consequences at the time AJ died, or since. Adam and Chance’s cover of what happened in Vegas shielded the described event from being known through today.

The character Grossman’s character is playing must be held to account for what he did as an adult, while also recalling what happened in Kansas so he can resolve that issue with his father.

Young And The Restless Spoilers – Abbott Family Remains Together

Dina Mergeron (Marla Adams) is back with her children. The viewers rightly felt it wouldn’t be for long, as this memorable arc appeared to be nearing its end when it was last seen in April.

Y&R could revive those terrific flashback scenes when all the Abbott’s were living in the 1960’s. Mix old school moments with today’s scenes as the final part of Dina’s life plays out.

Doing so would underscore the completeness of everyone’s lives, while not discounting the pain everyone endured and the perspective that was gained over time.

Young And The Restless Spoilers – More Chloe Needs To Be Seen

It was great to see Chloe again, as that meant Y&R was utilizing Hendrickson and Greg Rikaart’s (Kevin Fisher) exceptional talents. Hendrickson’s real life pregnancy was written into the show, which allowed Chloe and Kevin to prepare for their second child to be born.

Labor was teased just prior to the last new episode being seen, but didn’t happen. However, Esther Valentine (Kate Linder), Michael Baldwin (Christian Le Blanc), Lauren Fenmore Baldwin (Tracey Bregman), all great actors in their own rights, along with Khloe were anxiously expecting the new baby. Hopefully the birth also allows this group of characters to continue to be highlighted.

Of course there are numerous other engaging storylines like Amanda Sinclair’s (Michael Morgan) coming identity search and Nick Newman (Joshua Morrow) and Phyllis Summers’ (Michelle Stafford) potential full reconciliation. Patient viewers are waiting for those answers to be revealed as well.