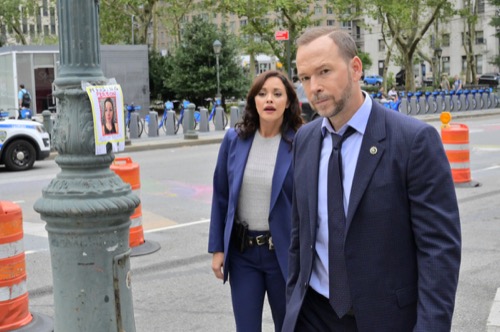 Tonight on CBS their hit drama starring Tom Selleck Blue Bloods airs an all-new Friday, November 5, 2021, episode and we have your Blue Bloods recap below. On tonight’s Blue Bloods Season 12 Episode 5 “Good Intentions,” as per the CBS synopsis, “Jamie and Eddie experience marital tension when Eddie allows her newly released ex-convict father to live with them; Danny and Baez go out of their way to help a desperate man find his missing sister.”

In tonight Blue Blood’s episode begins with Danny and Baez coming out of the court and her congratulating him getting Jason Lifgis go down for three murders and will never see sunlight as a free man again. Danny wishes they could get ahead of it sometimes before people got murdered. He walks down the steps and tells her, “like this” there is a poster of a missing a girl, Angie Shaw and her brother David is looking for her. Danny sees David handing out flyers, they go speak to him. David says his sister is not well and if they don’t find her, Danny tells him that he doesn’t have to, they are going to find her.

At the station, Janko finds out that her father is in a holding cell. She goes to see him and he says he was let go out of prison a few weeks ago, and now he is back behind bars, but assures him it is nothing serious and he will be let go. Her father is transferred to central booking.

Anthony is down by the river, a gun was found from an old case of his, if it is actually the gun he may have put an innocent girl in prison.

Abigail tells Frank that the arch bishop, Kevin, is there to see him. He is there because father Mike MacDougal’s apartment was vandalized last night and he is pretty shook up, but he will be fine. Frank says someone probably cased him as an easy mark seeing that he spends most of his days outside the precinct with a bullhorn saying defund the police. Kevin says he has a right to free speech and a 911 call. Frank laughs, Kevin says someone in the department leaked the tape of the 911 call. Kevin tells Frank that he has embarrassed the church, a person in his department leaked confidential information. Kevin asks him what is more important, his office or his faith.

Janko is coming out of the precinct with her father and he says he really appreciates this. She tells him that the trespassing charges have not been dropped. She asks him where he is staying, he says around and kisses her on the cheek, then goes to leave. She tells him that he needs a verifiable address, he is going nowhere.

Danny and Baez meet with David, he says that their mother died when they were young and his sister Angie had to wait on their father hand and foot until the day he died. Danny says they are on it, David asks them if they are for real, the cops have been pretty useless. Danny says that is them and this is him.

Anthony brings in the gun, in a plastic baggy with river water inside and puts it on Erin’s desk. He says one the last cases he caught with the NYPD, was a homicide of a black Lotus boy. He put away a member of a female gang from East New York, Jane Jones. Although Jane said she didn’t do it, she threw the gun in the river instead – and this could be the gun and she could have told the truth. Erin tells him that is giving the gun back to detective Eubanks so she can catalogue it properly, and they are going to this right.

At the station, Danny gets 24 hours to solve Danny’s case, the chief doesn’t want them taking stray cases off the street.

At home, Eddie is washing he dishes when Jamie gets home and he sees the couch made up as a bed, out comes her father from the shower. Jamie says he didn’t know that they were harboring fugitives. Jamie tells her they can find a motel in the city somewhere, Eddie tells him it will just be a few days. He is worried that she will be crying herself to sleep, he always has that affect on her.

The next morning, Jamie is working at the kitchen table when Eddie’s father wakes up. They have words, Jamie tells him to have a hot shower, makes calls and find another place to live while he counts his blessings that he has an angel for a daughter.

The arch bishop is walking down the aisle in church and telling father McDougall to dial it down when Frank says hello, he is there to meet father McDougal to ease tensions. Sid is there for backup.

Danny tells Baez that he tracked down David’s sister Angie, he got it from a soup kitchen where she went to apply for a job.

Anthony meets his old client, she says she remembers everything like it was yesterday. Erin rushes in and tells Anthony not another word, this meeting is premature.

At home, Eddie and Jamie are preparing dinner when her father tells Jamie that he could foget his past if he wasn’t throughing it up to his face every five seconds.

Danny and Baez find Angie, she says David is her ex fiancé and he has been stalking her for months. Danny tells her they can take her to the squad room and get her an order of protection. Angie goes to get her purse and she vanishes, Danny thinks David followed them there because her keys were left on the kitchen table,

At Sunday dinner, the family finds out that Eddie’s father is living with them and are surprised that they didn’t invite him to dinner. Frank tells her anyone in her family is welcome to the table. They arrive home later and it looks like Eddie’s father is gone. Janie tells her that he installed a spy cam. They watch it and see that some big guy came into the apartment and took her dad away, he was grabbing her father’s arm.

Erin tells Anthony that she has officially reopened his case.

Danny and Baez search Angie’s place, Danny finds her phone. He reads text that they were both meeting at a little park near Battery park. Meanwhile, Jamie and Eddie are looking for her dad. They find him just in time and he is left with a broken nose but he is fine.

Danny and Baez find Angie and David who is proposing to her with a ring in one hand and a knife in the other. She makes a run for it and Danny goes after David, who runs in traffic and gets run over.

Anthony looks into the case, it turns out that he was right, he convicted the right woman, she did it.

The arch bishop tells Frank that MacDougal is being transferred.