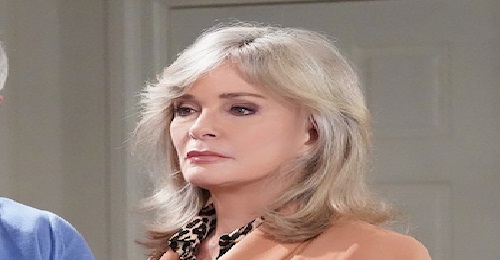 Doug Williams (Bill Hayes) just revealed Marlena as the devil, so it won’t take long for the other Thanksgiving guests to realize she’s possessed again. Of course, the hostage situation at the DiMera crypt is also in the process of being exposed, so Marlena will be caught if she doesn’t do something.

Days spoilers say the devil will be most concerned about keeping his baby scheme intact. Possessed Marlena has big plans for Ciara and Ben’s unborn child – not to mention they’re off doing their own thing for Thanksgiving and don’t know about the possession.

In other words, Ben and Ciara are definitely the people Marlena wants to turn to right about now. Possessed Marlena is running out of options and needs to make sure she can keep a tight grip on that baby she’s after.

As a result, Marlena will show up on Ciara and Ben’s doorstep to push for some help. She’ll insist she has to hide, so Ben and Ciara will quickly grow puzzled. They won’t understand why Marlena’s so frantic and what she’s so afraid of.

Days spoilers say Marlena will think fast and lie that John is a very abusive man. She might get the idea after thinking about the abusive relationship Paulina Price (Jackee Harry) ran from or perhaps Ben’s childhood. Marlena will argue that John hurts her and will act like she’s been keeping it a secret until now.

Naturally, Ciara will find Marlena’s claims extremely hard to believe. She’s known John forever and has witnessed how deeply devoted to Marlena he is. This won’t make any sense to Ciara at all.

Ben, on the other hand, knows Marlena better than John and will be more inclined to side with her. After all, Ben won’t see why Marlena would lie about something so horrible. He’ll also recall how abusive Clyde Weston (James Read) was and will know it feels like when you’re desperate to escape.

Since Ciara will still be struggling to buy Marlena’s accusations, DOOL spoilers say the devil will pull off a trick to convince her. That could involve some fake bruises that appear out of nowhere or some other shocker that alerts Ciara to trouble.

In the end, Ciara will agree to help Ben hide Marlena – and that means they’ll all land at a secluded cabin for the next phase of Marlena’s plot. Marlena will want to keep Ben and Ciara isolated so that they don’t find out about the possession news that’s spreading all over Salem.