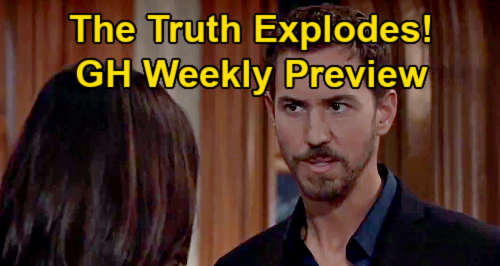 General Hospital (GH) spoilers preview teases that the action will really be heating up, as the truth explodes in Port Charles. The new GH preview for the week of February 22 is out, and it foreshadows a lot of angst and drama this week. There’s a lot to unpack in this preview, so let’s get right to it!

First off, Cyrus Renault (Jeff Kober) is going to have a bone to pick with Jackie Templeton (Kim Delaney), as he’s shown confronting Jackie at GH. Cyrus is shown rushing up to the nurses’ hub where Jackie is standing and plopping down his tablet.

“What the hell is this?” Cyrus fumes, most likely referring to a news story that Jackie has penned. Of course, it’s also possible that Cyrus is upset over Jackie’s involvement in trying to find his mom Florence Grey (Annie Abbott).

As GH viewers will remember, last week, Cyrus walked into the Port Charles Grill as Martin Grey (Michael E. Knight) and Jackie were talking about heading to Vermont to find Florence. Cyrus could be upset about Jackie’s plans regarding that.

Meanwhile, Carly Corinthos (Laura Wright) will have a tough time trying to explain what happened with Nelle Benson Jerome (Chloe Lanier) on that cliff. Carly is shown exasperated, saying, “That’s not what happened!” to someone, possibly to Nina Reeves (Cynthia Watros).

Nina really doesn’t care what Carly has to say; she’s convinced that Carly could have saved Nelle but didn’t.

Carly may have to explain herself to the feds, too, now that Nina has gone running to Jordan Ashford (Briana Nicole Henry) and demanded that Jordan get justice for Nelle.

Carly could be hauled to the station for more questioning this week, which would only add to her stress right now. Carly looks pretty exasperated in the GH preview, and it’s easy to see why.

Next, the new GH preview shows Maxie Jones (Kirsten Storms) lamenting that she has a really bad feeling about something.

It seems that everyone else’s bad vibes about Peter August (Wes Ramsey) are really getting to start to rub off onto Maxie, and she’ll have some feelings of impending doom about her upcoming wedding.

Given that GH spoilers clearly point to something major going down at Maxie and Peter’s wedding ceremony, Maxie has every reason to be worried!

Speaking of Peter, he’s heard in the preview ominously saying, “There’s only one thing you can do with a lie like that.” But who’s Peter talking to here? It could be Jason Morgan (Steve Burton), since he’s shown in the preview looking askew.

Or perhaps Peter is talking to Anna Devane (Finola Hughes), who also makes an appearance in the preview as she haltingly questions Peter at her house. It looks like Anna may be tiptoeing around with Peter, so we’ll see what he says in response to that.

Perhaps most likely is that this could be the time that Peter learns that his real mother is Alex Devane (Finola Huges) and not Anna.

Recall the video preview in which Peter receives a letter from the estate of Alex – very likely telling him the truth about who is his real mother – this could happen this week, February 22-26, and would explain what we see in the preview.

Robert’s the DA, so presumably he’ll be gunning for Alexis in the case of her stabbing of Dante Falconeri (Dominick Zamprogna). Alexis looks pretty hesitant, so she’s probably waiting for the bomb to drop about her consequences.

This will probably have everything to do with Franco Baldwin’s (Roger Howarth) condition. As GH viewers know, Franco’s starting to really feel the effects of his radiation treatment.

In Finn’s office, Elizabeth looks like she has a mini meltdown and hits the wall while exclaiming, “Damn!” Might Elizabeth get some horrific news about Franco’s condition this week?

The stress of Franco’s health decline will just be too much for Elizabeth and she’ll need to just let it all out. Recall that GH Buzz says Franco is not going to survive.

It’s going to be a great week on General Hospital, so don’t forget to tune in and watch the action! We’ll be sure to keep you up to speed on all the latest General Hospital news and spoilers, so keep checking back with CDL.

“There’s only one thing you can do with a lie like that.” #GH pic.twitter.com/b7gfwiLopv