The Bold and the Beautiful Spoilers: Steffy Rages – Sheila Moves In, Finn Bonds With Bio Mom? 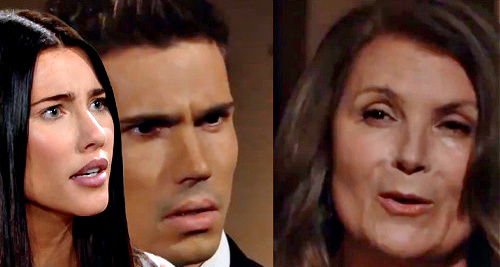 The Bold and the Beautiful spoilers reveal that Steffy Forrester (Jaqueline MacInnes Wood) lays down the law on her wedding day. Steffy is aware of the things Sheila Carter (Kimberlin Brown) has done, but John “Finn” Finnegan (Novlan Tanner) believes in second chances. The doctor also wants to get to know his mother. Finn could invite Sheila to stay with them.

B&B spoilers reveal that Finn and Steffy are thrilled about their upcoming wedding. Everything in their lives is just perfect right now. So, of course, there has to be an explosive bombshell.

It is confirmed that the mystery woman who crashes the “SINN” wedding is Sheila. She will turn out to also be Finn’s biological mother. It is hinted that the wedding will turn into complete chaos when Sheila makes her announcement.

Jack Finnegan (Ted King) has been acting strange ever since his first day on the CBS soap. Finn’s father had an apprehensive look on his face each time adoption was mentioned.

There was also Jack’s disapproval when Finn and Stefffy posted their wedding announcement online.

So, it’s clear that Jack knows something. Now, he might disclose that Sheila is Finn’s biological son. There are probably a lot more secrets that fans don’t know.

The Bold and the Beautiful Spoilers: Steffy Forrester’s Rage

It is teased that Steffy lays down the law with Finn and it’s all revolving around Shila. She probably doesn’t want Sheila anywhere near her children. Finn might have a hard time believing in or naming her children.

It is hinted that Finn could be tempted to invite Sheila to stay at the beachhouse. Why on Earth would Finn invite her to stay?

Finn could reason that it’s only for a few days and he has always believed in second chances. He will also want to bond with and get to know his birth mother. Steffy isn’t going to like this one bit.

There have been times when Brook Logan Forrester tried to get rid of especially considering Steffy tried to murder me several times. So, we will have to wait and see what happens next.

What do you think happens when Sheila Carter is revealed as Finn’s real mom?

One reason Finn could have to with B&B right now. Come back often for The Bold and the Beautiful spoilers, news and updates.

The secret is out…Sheila is back and bolder than ever! 💥 Don’t miss her return to Los Angeles on all-new episodes of #BoldandBeautiful next week. 👏 Watch the latest B&B episodes for free on @CBS or subscribe for more on @paramountplus! pic.twitter.com/YHqkXVjSdo