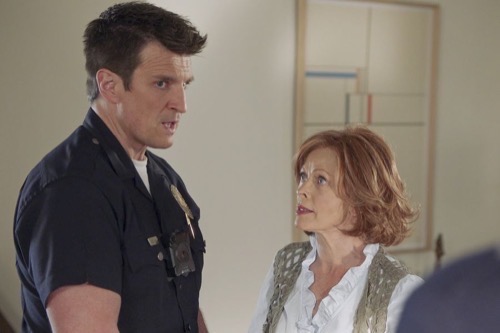 Tonight on ABC their new series The Rookie airs with an all-new Sunday, January 17, 2021, season 3 episode 3 called, “La Fiera,” and we have your The Rookie recap below. On tonight’s The Rookie season 3 episode 3 as per the ABC synopsis, “Officer John Nolan’s mom makes an unannounced visit that complicates his life, and Sergeant Grey considers retiring.”

Nolan’s mom calls, she wants to visit. He is about to say no and she is already at the door, she broke up with her fiancé. He says he can’t be late, she says she will settle herself in.

At roll call, Grey reminds the rookies the only two reasons they should discharge their weapons. Officer Dixon is their range master and gives them the instructions on their shooting practice. If they accidentally shoot a civilian, it is an automatic fail. Officer Chen comes in first, Nolan was distracted and comes in last and warned that if he doesn’t improve he is going to be put on a desk job.

Chen meets with Tamara, she reminds her that they need to find her a real place to live. Then, she gives her the keys to the car and tells her it is officially hers, drive safe.

Stanton and West show up at a crime scene, they are looking at the victim and it looks like a gang killing. Lopez shows up, she sees West is a little off and asks him if he is ok, he says yes.

Chen and her Bradford are driving around when she sees a guy breaking into her former car, that she gave Tamara. Turns out, he bought it from Tamara for four thousand dollars and Bradford gives her this I told you so look.

Harper and Nolan are in the car driving, he says the guy in the scuba suit at the gun range distracted him, she say he should have been more focused, no excuses. The streets are full of distractions. Nolan gets a call from his mother, she wants directions downtown. He tells her to use the driving app. All of a sudden, they hear a woman screaming that another woman is destroying her AIR BnB house. Nolan ushers the owner out of the house, the woman on the bed, Monica, is about to give birth. The woman is taken to the hospital, the doctor gives the woman and attitude when she tries to explain what happened the last time she was in the hospital pregnant. Monica says she wants another doctor.

Sergeant Grey tells his wife, Luna, that he is still retiring, he is just waiting to send this set of rookies along their way. Lopez comes in and talks to her about her case, the gangster who was killed.

Harper finds Monica a different doctor while Nolan gets a call from his mother and he hears her in distress. Harper tells him to take the car and call for backup. At his house, Nolan finds his mom and her fiancé, but she is fine. He asks her for the ring, she says it was so big, it slipped off her finger. Her fiancé says she has forty eight hours, he calls her a gold digger and says he wants to file a police report. Nolan tells him that it is his right, his mother says he is betraying her.

Chen sees Tamara, she is dressed in new clothes. Tamara asks her if she knows what it is like to go to school every day with greasy hair and dirty clothes. It was her car and she sold it to feel normal, she put the rest in her college fund. She didn’t tell Harper because she didn’t think she would understand. They get a call, Chen and Bradford have to go.

West and Stantion get a call, they are looking for a perpetrator with a blue jacket. When Stantion sees a young black man in a green jacket, he pulls the car over. He approaches the man and knocks him to the ground, then cuffs him. The young man says he is on his property, his parents come out of the house frantic when they see their son handcuffed and on the ground. Stanton pulls his gun on the parents and tells them to get on the ground. Stanton tells West to arrest them, West is surprised and asks if they are arresting the whole family, even the grandmother – he asks him if he is serious.

Chen and Harper arrive, Stanton takes West to the side. Harper joins and tells Stanton that they found the perp two blocks away. Stanton says he is arresting everyone. Harper says he grabbed the wrong guy and there are cameras are everywhere. Stanton is upset, he turns to Harper and says he is the supervisor. West takes off the cuffs and apologizes to the family.

Nolan is back at the hospital, Harper tells him that mother and child are doing fine. He explains that he went home because his mother’s fiancé showed up, and end up filing a complaint for him that he knows he is never going to hear the end of from his mom.

Lopez tells Grey about her case, La Fiera is very real and very dangerous, a woman connected to her homicide. Lopez sees the papers that Grey is retiring, she tells him that she is happy for him.

Nolan and Harper overhear Stanton tell off West about what happened with the family earlier in the day. After Stanton leaves, Nolan tells West that he should tell Grey about this. West doesn’t want to, he just wants to ride this through for another few weeks and get through it.

Nolan shows up at the shooting range, he sees a putting something in his trunk and identifies himself, the guy shoots at him and then drives off. Nolan is ok, he grabs for his gun but too late, the guy is gone. The car was a rental, the renter was Guillermo Sandoval, Nolan says it is the guy who shot at him. Harper says they got a hit one his credit card and a motel. Nolan and Harper head over there, they arrest him and he is actually a cop. He survived a massacre, men, woman and children were slaughtered, his children. The man he killed didn’t kill his children, he says no, but he was ordered to. La Fiera is involved and he is not going to say anymore.

Lopez finds out that La Fiera is in town on a college tour with her son, Harper thinks they are going to kill her on campus. The squad heads to the college. Lope finds La Fiera and tells her what they suspect, she gives a bullet proof vest to her son just as bullets start to fly off. Civilians are trying to run out of the campus, La Fiera ran into one of the theatres with her son, Diego and Lopez to stay cover.

Nolan and Harper head to the roof, Harper shoots the assailant in the hand, then he decides to jump to the ground to his death. La Fiera and Diego are released after giving their statements.

West goes to speak to Grey and tells him what happened with Stanton, when he arrested the young man who did not meet the description of the perpetrator. Bradford walks in and says it is true, Grey says he will put Stanton on a desk job. Benching Stanton is the only recourse they have, West says it is not good enough.

Tamara meets up with Chen, she tells her that she doesn’t trust people who are nice to her. Tamara gives Chen her computer, she says it is not safe at her cousins, Chen offers to keep it at the station for her. Chen invites her to dinner, so they can talk.

Lopez arrives home and there is a gift on the table with a red bow, inside there is a doll from La Fiera with a note to thank her for saving her son’s life. Meanwhile, Nolan arrives home, his mother is packed up and says she is leaving. He says he is tired of playing the games with her, she says she is tired too.

He says maybe they can just try being real with each other, she says she will give it a shot. Then she offers to make him dinner, he says that would be great, she puts her bag back in his room. Grey is sitting at his desk, his wife is there and reminds him he was supposed to leave fifteen minutes ago. He says West came to see him, there is a problem, and not a good one.