The Young and the Restless Spoilers: Sharon and Rey’s Marriage Doomed – See Three Reasons For a ‘Shey’ Divorce 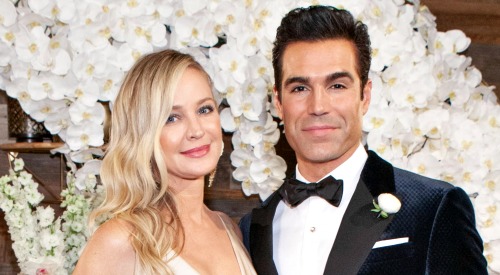 The Young and the Restless spoilers document that Sharon Rosales (Sharon Newman) and Rey Rosales (Jordi Vilasuso) have just gotten married. It’s highly unlikely that Y&R would have invested so much time in writing up this couple to then turn around and take it down days, or weeks after it started.

However, looking into 2021 and beyond, there are troubling factors to consider. Rey hasn’t been a parent until now. Sharon’s history with Nick Newman (Joshua Morrow) and Adam Newman (Mark Grossman) is deep. Plus, unexpected soapy circumstances must always be considered.

This point is admittedly the weakest. Fans saw that Mariah Copeland (Camryn Grimes) and Faith Newman (Alyvia Alyn Lind) truly respect what Rey has brought to their mom’s life, which is why they’ve come to care about him.

So, might Rey become a bit overbearing, reaching back to his younger days, when he had to help raise his sister and brother? Maybe. But Mariah is an adult and Faith, well, she has been going off course. Right?

Yes, conflict that’s centered on how to handle Faith’s to-be-exposed problem could drive a wedge between Rey and Sharon. But probably not.

Nick likes Rey a lot, which is why he served as best man at the Shey wedding. Adam detests Rey and the feeling is mutual.

If Sharon ever has issues with Rey, she could confide in either ex-husband. Nick would likely be supportive. Adam would probably use the situation to his own advantage.

So, could Nick come between Rey and Sharon. Possibly, but Y&R has never written Shick back to remarriage. So the threat of that reunion doesn’t project well.

As for Shadam, that was the 2020 teased reunion. It didn’t happen, but always could in the future. So, yes, keep an eye on Adam, as usual.

Young And The Restless Spoilers – Unforeseen Circumstances Ahead?

This wild card topic is what is implied. Literally any plot device could be used to split Shey if Y&R eventually decides to do so.

Both characters could grow apart, or Mia Rosales (Noemi Gonzalez) could split from Arturo Rosales (Jason Canela) if their child is revealed to be Rey’s.

As for Sharon, her marriages haven’t lasted. But hopefully this one does, as Shey is a good couple that is worth rooting for.