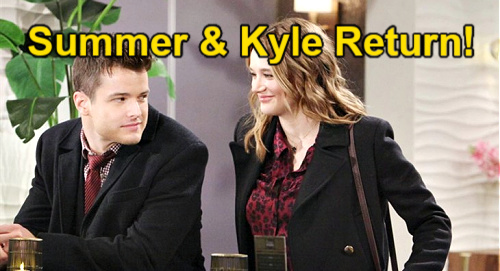 The Young and the Restless (Y&R) spoilers reveal that Kyle Abbott (Michael Mealor) and Summer Newman (Hunter King) will return to Genoa City, so we’ve got the details on Michael Mealor and Hunter King’s October comeback. Let’s recap the “Skyle” situation and talk about what’s in store.

After contract negotiations failed, both Summer and Kyle were written off canvas. Kyle joined Summer in Milan, where they started a new life together and have been raising Harrison Locke (Kellen Enriquez) while continuing their careers.

Of course, Y&R fans can’t forget Sally Spectra (Courtney Hope) and Tara Locke (Elizabeth Leiner) teamed up to drive Summer out of town, but it’s working out pretty well for “Skyle” at this point.

Phyllis Summers (Michelle Stafford) has been particularly torn up over her daughter’s departure and Jack has admitted to his own sorrow over Kyle and Harrison moving away.

It’s clear that Jack and Phyllis could use a visit from their children, so Y&R thankfully has one coming up for them.

Hunter King will reprise her role as Summer Newman while Michael Mealor steps back into the part of Kyle Abbott.

Though it’ll only be for a handful of episodes, Kyle and Summer will indeed pop back up for some fall family reunions.

SOD confirms that King and Mealor are filming scenes this week that’ll air in October.

Just in case you were afraid Summer and Kyle’s appearances involved more of those dreaded video calls, they’ll be seen in person and in familiar surroundings.

The Young and the Restless spoilers specify this “Skyle” visit will take place in GC and refer to the characters coming home.

Bottom line, Kyle and Summer will return for a brief multi-episode visit, so “Skyle” fans will be eager to see them this October.

It’s always nice when fan favorites come back to play, even if it’s not for long.

The Young and the Restless spoilers say Summer and Kyle’s joint comeback certainly gives viewers something to look forward to!

CDL will have other terrific soap spoilers, news and updates to pass along, so make us your favorite hotspot.